Today's article will discuss nonviolent communication so continue reading a find out how to do so assertively and without resorting to criticism, comparisons, and negative emotions. 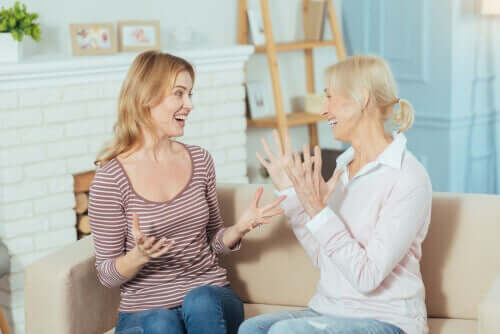 Nonviolent communication is possible but many people aren’t aware of it. This is because many of us didn’t learn to communicate properly early on. It may even be that some people just bring out the worse of each one of us.

So, why are we kind and compassionate with some people, yet rude and violent toward others? Psychologist Marshall B. Rosenberg researched these questions and developed something he refers to as Nonviolent Communication.

This type of communication, also known as empathic, is based mainly on giving from the heart. That is, a message that isn’t based on comparisons, insults, or negative elements. It’s quite the opposite, in fact — feelings, assertiveness, respect, and compassion.

Oftentimes, people are unable to identify certain signs that denote poor communication. Signs that are as visible as negative and packed with destructive criticism, denial, and lack of reflection on the part of those who say them. Hence, they lead to disputes, conflicts, attacks, and defensiveness.

Continue reading, today’s article will discuss how to identify these messages by including their main characteristics.

Marshall B. Rosenberg was the founder and director of the Center for Nonviolent Communication (USA). He was deeply interested in new forms of communication and presented peaceful alternatives to violence and aggressiveness in interpersonal relationships.

Thus, in his book Nonviolent Communication: A Language of Life he summarizes the four key elements of nonviolent communication (NVC):

It also points out the importance of connecting with your needs and those of others and empathy is a fundamental aspect of this type of communication. This is because it’s difficult to successfully share information without it.

The author also refers to the existence of moralistic judgments in his research. In his opinion, these “presuppose a wrong attitude on the part of those who don’t act in accordance with our values.”

Find out What to Do if Your Partner Is Verbally Abusive

While it isn’t always possible to be in a friendly meditative mode, there are issues that definitely cannot and shouldn’t be up for negotiation. This includes common courtesy, a fundamental pillar on which everyone should sustain relationships with others.

In fact, in 2015, the Ministry of Social Development in Argentina participated in the seminar “Audiovisual, Transmediality and Education in the 21st Century,” in order to promote the inclusion of the word buentrato (good treatment) in the official dictionary.

The speaker Marisa Graham detailed the vicissitudes of the construction of this word, which doesn’t exist in the dictionary, unlike the word maltrato (mistreatment). He further explained:

“We seek to include the word buentrato in the dictionary as we know the importance of words in the construction of reality. We’re also trying to disprove cultural myths about raising children, such as spanking being an appropriate form of discipline.”

Initiatives such as the one mentioned above may open doors and minds, so that institutional, organizational, and personal violence ceases to be a normal way to relate to others.

Do you know What’s Active Listening?

There must be adequate information and its corresponding access in order to communicate effectively. Thus, we must do our best to avoid making comparisons. This is because these are wrong most of the time, not to mention unfair.

As you can see, getting rid of judgments is important, and so are expectations and evaluations. Indeed, it isn’t easy but we can do it if we try. You’ll see how soon you begin to communicate what you want to say without others feeling attacked or offended.

Taking responsibility (without those who meaninglessly penalize themselves) is an essential step. We often blame others for what happens to us or for the way we feel. Yes, many things bother us, but we’re in charge of how we react and the attitude we take.

Empathy is a fundamental part, as we mentioned above. It’s all about learning to put oneself in the other person’s shoes and seeing things from their perspective. It’ll make it way easier to understand their reactions. We can all be assertive while respecting others as well as ourselves.

As you can see, it isn’t easy to practice non-violent communication because we have so many bad communication practices deeply ingrained in us. The important thing is to be aware of how we communicate and reflect on the things we want to change. Anyone can do it, patiently, and one step at a time.