Is Mononucleosis Contagious or Not?

Mononucleosis meets the same criteria as many other viral illnesses. So, is mononucleosis contagious? Can we prevent its spread? The main means of prevention will be avoiding contact with the saliva of an infected person. 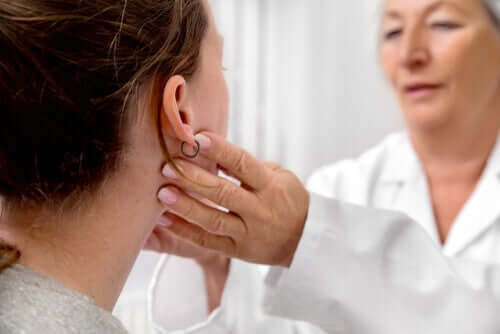 Is mononucleosis contagious? This viral infection is commonly known as “the kissing disease”. This refers to the way that the infection can spread from one person to another.

However, this has erroneously lead many people to believe that the virus only spreads by kissing. However, that’s not quite true. Like many illnesses of this type, the virus is present in drops of saliva. Therefore, it can also spread by sneezing, coughing, or being in contact with objects that contain the remains of saliva.

Mononucleosis is a viral illness that’s relatively common in the general population. And, in most cases, it goes away on its own. Complications are uncommon, so it doesn’t leave behind any lasting effects.

Mononucleosis can appear at any age and at any time of year. However, it’s most common among adolescents and young adults. It appears that, over time, we acquire immunity to this infectious agent.

As we mentioned, this infection is also known as the kissing disease, although this name isn’t actually very accurate. Is mononucleosis contagious? Yes. But not as much as other viral pathologies. Therefore, a mononucleosis pandemic is unthinkable given the current context of low transmissibility.

The main means of preventing the spread of infection is avoiding contact with the saliva of an infected individual. That’s because their saliva contains the active illness. This recommendation is especially important for pregnant women, those who have immunodeficiencies, and those who’ve undergone a transplant.

Keep reading: How Can We Prevent the Spread of Viruses?

In most cases, this illness is caused by the Epstein-Barr virus. Once a person contracts it, the viral particle remains in their body for life. However, the illness is only actually contagious at specific moments.

The illness has an incubation period of between four and six weeks. After this time, symptoms begin to appear and last for approximately one month. And it’s during this particular time that mononucleosis is relatively easy to spread. Therefore, it’s best for patients to remain in isolation.

There are also cases, in both children and adults, where the illness produces no symptoms at all after incubation. Some people only experience fatigue and nothing more. In that case, they may associate their tiredness with other factors like physical activity, stress, lack of sleep, etc.

Patients that are asymptomatic are active transmitters of the virus without even realizing it. We’re talking about specific situations that fly under the radar because of a lack of medical consultation. Since these patients don’t experience symptoms, they don’t suspect illness and, therefore, don’t see a doctor.

Experts are still unsure about how much time must go by before the illness stops being contagious. The most commonly accepted opinion is that patients have the potential to spread the virus for up to 12 months after overcoming symptoms. However, after 18 months, experts say that it’s no longer possible to spread it.

The symptoms of mononucleosis

The typical symptoms are fever and fatigue. These tend to be the first symptoms that appear and the last to go away. It’s also very common to experience a sore throat, swollen tonsils, swollen lymph nodes, swollen spleen, and a headache.

What to do in the case of mononucleosis?

Currently, there’s no treatment capable of curing mononucleosis. The traditional recommendation is to get plenty of rest and drink plenty of fluids. This is especially important during the most acute phase. Patients may also take anti-inflammatory medications and pain killers if prescribed by a doctor.

Given that mononucleosis is contagious, those who are infected shouldn’t share personal items, food, or drinks. The period in which patients need to practice caution is long. However, strict adherence is the only way to prevent spreading the illness to others.

Illnesses
5 Types of Hepatitis and Their Main Characteristics