Is Caffeine Consumption Safe during Pregnancy?

What’s the allowed caffeine intake during pregnancy? Find out whether or not it’s safe to consume coffee and other caffeinated foods and drinks during pregnancy in this article. 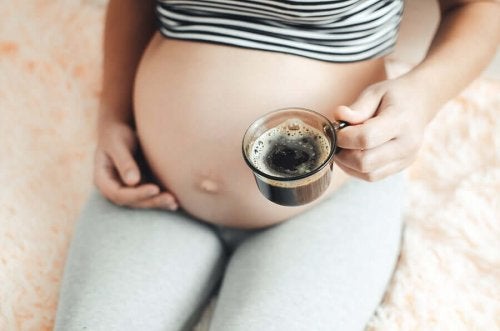 One of the first questions that comes to women’s minds after finding out that they’re pregnant is the diet they have to follow during this stage. One of the most frequently asked questions is whether or not caffeine consumption is safe during pregnancy.

There are many myths and tips about it. But how true are they? In this article, we present the latest research on the matter.

The vast majority of women drink coffee in the morning and many continue drinking it throughout the day. However, did you know that other drinks and foods also contain caffeine?

Some soft drinks, chocolate, energy drinks, some infusions, such as tea, and even some drugs contain caffeine. Therefore, you must be aware of all of them to calculate your daily intake!

There are many myths regarding caffeine consumption during pregnancy. Below, you’ll discover whether these myths are true or not, based on scientific information.

Some animal studies concluded that mothers who consumed caffeine had an increased risk of giving birth to offspring with birth defects. However, human studies haven’t yielded conclusive data.

A 2011 study analyzed the association of caffeine consumption during pregnancy with birth defects such as esophageal and intestinal atresia, microtia/anotia, craniosynostosis, diaphragmatic hernia, omphalocele, and gastroschisis.

Although they detected small risk increases in women who consumed caffeine during pregnancy, they didn’t find any convincing evidence. Thus, further research into the association of caffeine with birth defects is necessary.

You may like this article: Home Remedies for Caffeine Withdrawal

2. If you drink caffeine during pregnancy, your baby may have a low birth weight

In 2014, researchers analyzed 13 existing studies in depth to determine if there’s a relationship between caffeine consumption during pregnancy and low birth weight (less than 5.5 pounds).

The result showed that high caffeine consumption was associated with an increased risk of low birth weight. For this reason, they recommend minimizing caffeine intake.

3. Caffeine may cause miscarriages

Researchers analyzed 28 studies to determine if there’s an association between caffeine consumption and miscarriage. The results suggested a relationship between both factors. Thus, for each 150 mg increase in caffeine intake, the risk of miscarriage increased by 19%.

4. Caffeine passes through the placenta and could affect the baby

Different studies support this myth. If the mother consumes caffeine, the baby also does through the placenta. As you surely know, caffeine is a stimulant that can cause insomnia and other side effects.

When you drink caffeine, your baby also ingests it. Thus, they may enter a phase of hyperactivity that also doesn’t allow them or you to sleep! For this reason, it’s usually advisable to minimize its intake.

5. If you drink too much coffee, you could become dehydrated

The caffeine in coffee, teas, and other drinks and foods is diuretic. Therefore, it increases the frequency of urination. People who drink a lot of caffeine may be at an increased risk of dehydration, which is one of the worst pregnancy complications.

If you’ve ever heard this claim, you should know that there’s some truth behind it. However, only regarding high caffeine intake. The American College of Obstetricians and Gynecologists (ACOG) published that a high intake (more than 200 mg/day of caffeine) could increase the risk of preterm labor.

You should also read: 5 Best Tips to Stop Drinking Too Much Coffee

Check with your doctor regarding your caffeine consumption during pregnancy.
Currently, there’s no conclusive data on how much caffeine is safe for the baby during pregnancy. However, doctors generally consider that a moderate intake, meaning less than 300 mg a day, shouldn’t cause complications during pregnancy.

The medical recommendations on safe caffeine intake for a pregnant woman vary between 150 and 300 mg/day.

If the mother can’t avoid caffeine consumption during pregnancy, either because she’s used to consuming a lot of it or due to her cravings, the World Health Organization recommends moderating it. Either way, check with your doctor to receive their advice on this.

5 Best Tips to Stop Drinking Too Much Coffee
Drinking a cup of coffee every morning is a habit for many people. However, the problem is when you drink too much coffee. Read more »
Link copied!
Interesting Articles
Pregnancy
Is it Risky to Tan During Pregnancy?

Interesting Articles
Health
Atopic Skin: What Is It and What Causes It?