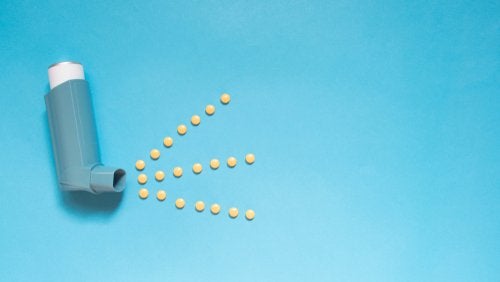 Ipratropium bromide is an active substance that belongs to the group of medications labeled as inhalation anticholinergic bronchodilators. They relax the muscles of the bronchi and facilitate the passage of air and help a person to breathe normally again.

Ipratropium bromide is a competitive antagonist of muscarinic acetylcholine receptors. It has a potent effect on bronchial receptors, both administered intravenously and by inhalation. However, it doesn’t produce tachycardia. In addition, it reverses bronchoconstriction induced by any inhaled cholinergic agonists.

The dose must adapt to the individual needs of a patient and they may administer repeated doses until they stabilize. However, only a doctor should determine the time intervals between doses.

You must neither exceed the recommended daily dose in acute nor in maintenance treatments. There may be a combination of Ipratropium bromide with short-acting beta-2-adrenergic agonists in the same nebulization chamber.

You must use the solution as soon as possible after mixing it and discard any leftovers. Also, there are various types of nebulizers in the market with which to administer this medication.

Contraindications and precautions to consider

Ipratropium bromide is not recommended if you’re allergic to it or to other similar substances, such as atropine or its derivatives. Also, you shouldn’t use it in cases where there are acute coughing, wheezing, and bronchospasm attacks that require a quick response.

You must exercise caution in the use of anticholinergic agents in patients with narrow-angle glaucoma, prostatic hyperplasia or bladder obstruction. In addition, you must give special attention to patients with cystic fibrosis, as they may be more susceptible to gastrointestinal motility disorders.

Exceptionally, there have been hypersensitivity reactions immediately after the administration of Ipratropium bromide. These reactions manifest as hives, angioedema, rash, bronchospasm, oropharyngeal edema and anaphylaxis.

Incorrect use of Ipratropium bromide spray could penetrate the eyes and can lead to eye complications such as:

How to use the Ipratropium bromide inhaler?

You must learn to use this medication properly if you’re to undergo treatment. In particular, you should avoid spraying it in your eyes.

You may also be interested in Terbutaline: What’s it Used For?

Its interaction with other drugs

There’s some evidence that co-administration of Ipratropium bromide with beta-adrenergic and xanthine derivatives may enhance the bronchodilator effect. However, you can use this medication together with other drugs commonly used in the treatment of chronic obstructive pulmonary disease (COPD).

The risk of acute glaucoma in patients with a history of narrow-angle glaucoma may increase by the co-administration of nebulized Ipratropium bromide and beta-2-adrenergic agonists.

Like all medications, Ipratropium bromide can lead to side effects. However, these don’t appear in everyone. The most frequent adverse effects are:

Be it on its own or associated with a beta-adrenergic, Ipratropium bromide has a therapeutic effect in the treatment of bronchospasms. This is especially the case when associated with viral bronchiolitis and bronchopulmonary dysplasia in infants and young children.

How Do Inhalers Work?
Asthma is a chronic respiratory disease. It's harder for air to get to the lungs when you breathe in and it's necessary to use inhalers. Read more »
Link copied!
Interesting Articles
Medication
Glycerin Suppositories: How Do They Work?

Generally, people use glycerin suppositories to solve occasional constipation. Doctors recommend them to treat this condition because they act quickly…

Prospantus syrup is a syrup with mucolytic and expectorant action. It's made of the dry Hedera helix extract. In addition, it's used…

Crushing medication is a common practice to make taking pills easier. However, it alters the integrity of the drug and, therefore,…

Medication
Learn About the Consequences of Almagate Abuse

Almagate abuse has become a common phenomenon. Since it's an over-the-counter drug in pharmacies, many patients see it as the…

Xenical is an anti-obesity drug whose active substance is orlistat. This active principle exerts its effect by reducing the absorption of the fats you consume in meals by 30%. How…

Medication
What Is Drug-induced Photosensitivity?

Drug-induced photosensitivity is quite common. In fact, researchers estimate that around 3,000 medications can cause this effect. It can appear…