The Interesting Origin of Dreamcatchers

The origin of dreamcatchers has its roots in a Native American tribe that, throughout the 60's, started to make these handmade objects in order to sell them to tourists. 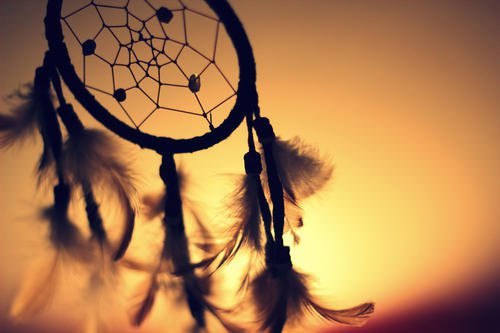 Do you have a dreamcatcher hanging near your bed? Or maybe in the entrance of your house, or near a window? According to the legend, they allow you to filter your dream world. They channel your positive emotions and filter out all the negatives, in other words, all the nightmares. Let’s learn about this popular belief, along with an interesting myth on the origin of dreamcatchers today.

The Ojibwe tribe and the origin of dreamcatchers

The origin of dreamcatchers has its roots in a Native American tribe that, throughout the 60’s, started to make these handmade objects in order to sell them to tourists. They are beautiful handcrafted items that make up part of their culture and tradition.

The Ojibwe are from North America and it’s common to find settlements in Ontario, Wisconsin, and Minnesota. To create the dreamcatcher, they used nettle fibers tied with a type of circular or tear shaped ring, where they made a web in the form of a spider’s web. They also used willow wood, and in general, the dreamcatchers didn’t have a very big diameter, about 10 centimeters.

They sold them with the idea that they could prevent nightmares, and keep away bad energy and evil spirits. Interestingly enough, there were many native tribes that criticized the Ojibwe for selling these objects. They said that when they did this, they lost the mystic and spiritual value of the dreamcatchers, as tourists bought them only for aesthetic reasons.

Despite the criticism, throughout the 60s, dreamcatchers were one of the best-selling objects in America, and became popular throughout the entire world.

See also: When Your Dreams Reflect Your Health

The purpose of dreamcatchers

People say that we should hang the dreamcatchers on the bed’s headboard or above children’s cribs. Their purpose is to dispel the nightmares or bad dreams that some people have once in a while. For the Ojibwe tribe, these objects functioned in the following way:

This tradition of dreamcatchers also comes from a Ojibwe legend. Their central figure was a beautiful woman named Asibikaashi. She was also know as “spider woman” and, far from having a negative or concerning connotation, what made this women beautiful was how she cared for all the children in the world.

According to the myth, she would lean over the children’s crib or bed to create an invisible web. This was a fine and delicate fabric that was capable of reaching any nightmare and making it disappear. Nothing bad could happen to the child if Asibikaashi was with them. All the negatives would get stuck to her web, until dawn, when the brightness of the morning renewed all of the good things and made all of the bad things disappear.

Read more: 6 Types of Negative Energy You Need to Eliminate

We should also add that there is a second version on how dreamcatchers work. The Lakota tribe, on their part, had another explanation, which is as follows:

Of course, it’s unlikely that these objects can keep “bad energy” away, but the origin of dreamcatchers is  an interesting tradition that many people like to believe in, and it’s a small tribute to those North American tribes, which can keep their legends alive.

7 Questions About Dreams
The world of dreams has always been of great interest, both for scientists as well as ordinary people. We'll answer 7 interesting questions about dreams. Read more »
Link copied!
Interesting Articles
Did you know?
New Year's Traditions Around the World