Incredible Benefits of Honey and Cinnamon

Honey and cinnamon have great medicinal properties you can combine. 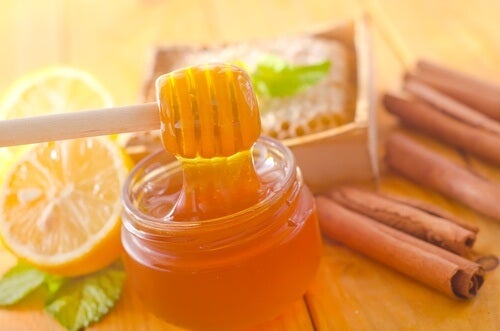 Honey and cinnamon have great properties that strengthen the immune system and prevent disease.  They also reduce pain and inflammation in the joints.

Honey and cinnamon are two great gifts from nature. They are wonderful for health thanks to their ability to fight and prevent different diseases.

Combined or by themselves, these two ingredients have a powerful antioxidant, anti-inflammatory and antibiotic effect that’s effective for fighting pathogens and promoting good functioning of vital organs.

Honey and cinnamon have been combined for several years as part of natural remedies used to treat different health problems, along with increasing the body’s defenses and even supporting weight-loss diets.

A lot of people don’t know just how beneficial this mixture is for health. Nor do they know that it’s a good idea to include it in their diets.

What are honey’s properties?

Bees produce honey. Practitioners of natural medicine value it highly. That’s because it contains a high concentration of antiseptic, strengthening, calming, laxative, diuretic and bacteria-killing agents.  These can be used to improve health.

Honey tastes sweet and is very pleasant.  It is extremely versatile, which allows it to be mixed with other ingredients to strengthen its effects.

What are cinnamon’s properties?

Although its most popular uses are related to cuisine, cinnamon is also known for being highly medicinal. That’s because of its antimicrobial, antibacterial and antioxidant properties. When combined with its vitamin and mineral content, it makes a powerful natural remedy.

Why combine honey and cinnamon?

Both ingredients provide a lot of benefits to the body. That’s why it’s not a bad idea to combine the two into a powerful remedy. This might help you face all kinds of health problems.

While each ingredient is healthy on its own, mixing the two can help to:

How to prepare this natural honey and cinnamon remedy

It’s also a good idea to support this with a balanced diet and healthy lifestyle.

Drink one cup of this infusion in the morning at least 30 minutes before breakfast. Then drink another cup at night before going to bed.

Keep this in mind about honey and cinnamon!

This honey and cinnamon remedy is not a miracle worker. Also, its effects differ from depending on how regularly you drink it.

Never eat this in excess. That’s because too much cinnamon can be toxic to the body.

Experts recommend that individuals who suffer from digestive problems avoid it. Some examples of these problems are gastritis and also intestinal ulcers. Remember that cinnamon can be highly irritating if you have these issues.

If you’re also taking antibiotics consult with your physician before drinking this.

4 Antibiotic Treatments for a Throat Infection
Cases of the common cold and flu increase in number during autumn and winter months. Their usual symptoms are a sore throat, fatigue, headaches, mucus, and a cough. Read more »

Link copied!
Interesting Articles
Taking care of your body
Is Creatine Safe for the Kidneys?