How to Sterilize Kitchen Utensils

Did it ever occur to you that you should sterilize kitchen utensils? It's the healthiest thing to do. We'll tell you the best ways to do it. 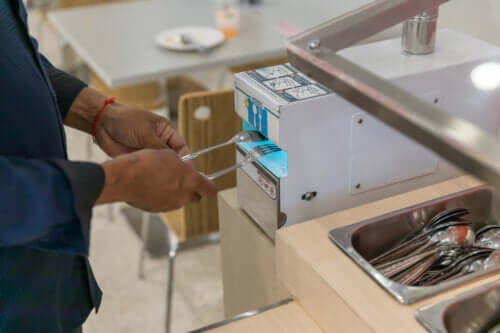 If you love to cook, you may be wondering how to sterilize kitchen utensils and if it’s even possible. The answer is yes. Sterilization is a process by which you achieve the total destruction of microorganisms present in a certain place or object.

Proper sterilization ensures that food is free of pathogenic germs and cross-contamination. So you must learn how to sterilize them correctly to avoid mishaps. We’ll tell you how to do it in this post.

Why is it important to sterilize cookware?

You may be thinking that you should wash them with soap and water and that’s enough. But it’s not. Dishwashers, dish sponges and dishcloths are the dirtiest places in your kitchen. They can harbor bacteria such as Salmonella and E. coli.

There may also be cross-contamination with other foods, as diseases use utensils as a channel to move around.

In the case of Salmonella, we’re talking about a bacterium that lives in the intestine of people and animals. It causes nausea, vomiting, cramps, diarrhea, fever, chills, headaches, and blood in the stools.

E. Coli causes almost the same symptoms as Salmonella, except for the headaches. Both bacteria are fecal coliforms, which means that their presence in an environment indicates contamination with feces. There are other less serious illnesses, such as Campylobacter infection, rotavirus or listeriosis.

They’re usually brought into the kitchen by meat contaminated with animal feces or by not washing hands when preparing food. So, disregarding hygiene rules can cause these foodborne infections.

Also read: What Are the Symptoms of Gastroenteritis?

How can I avoid these diseases?

These diseases are preventable by maintaining proper hygiene in a kitchen. One of the main measures you should take is to clean the dishwasher sponge and dishcloths with boiling water every day. This way you avoid the proliferation of germs.

You should also clean the refrigerator thoroughly. Keeping it below 4 degrees Celsius is recommended to prevent the growth of microorganisms.

As for waste, it’s best to cover it and take it out frequently. Buy a container with a pedal so that you don’t have to handle it with your hands. And, as is already clear, you must sterilize the kitchen utensils.

How to sterilize kitchen utensils

To sterilize kitchen utensils correctly, they must be separated. We’ll explain the process for each one of them.

Knives are one of the most important kitchen utensils. There are two methods for sterilizing knives; one is the classic method and the other is with ultraviolet light.

The classic method is to introduce the utensils in steam, which has the ability to sterilize because in a gaseous state the molecules penetrate the objects more easily. When hot, they’re capable of killing pathogenic microorganisms.

These microorganisms have a growth temperature between 20 and 45 degrees Celsius. So do spore-forming bacteria that cause gastrointestinal problems.

These spores can withstand high temperatures, and so to obtain optimum sterilization, it’s necessary to reach temperatures above 100 degrees Celsius for 15 minutes.

In the case of ultraviolet sterilization, which is one of the most widely used in the food industry, it’s capable of killing most microorganisms. This requires a UV lamp, although sterilizing buckets and ovens with this technology are sold.

You must sterilize them separately from knives. First put all cutlery and utensils such as tongs, scissors, spatulas or skimmers in a container or tray just for sterilizing.

Next, boil water with all-purpose detergent and pour into the container, leaving them all submerged. Cover with a lid and let stand for 5 to 20 minutes.

Be especially careful if the utensils are made of plastic. After the time has elapsed, remove the lid and carefully remove the water, allowing the objects to cool. Dry and store in a clean place.

To disinfect the chopping board, it all depends on the material it’s made of. They’re usually made of wood. In the case of vinegar, it doesn’t affect the fibers of the surface and avoids deteriorating it. Its compounds allow it to fight the bacteria that cause food infections.

To use it, clean the surface, and spray the white vinegar. Let it act for 10 minutes. After this time, rinse with water and let it dry.

If you want to neutralize the odor, use lemon juice. Start by cutting a slice and rubbing it on the surface of the board for 2 minutes. Let it air dry without rinsing.

Sterilize for your family’s safety

In general, you should sterilize your utensils because they’re the ones you use to handle what you put in your mouth and they can be a means of food contamination. With this simple practice, you add safety to your family’s health.

Take time to do it and combine it with other care measures, such as separating meats and vegetables and using products of safe origin.

3 Great Ways to Remove Rust from Kitchen Utensils
If your kitchen utensils have started to rust, you can use these remedies to make them look like new. Get some baking soda and give them a try. Read more »
Link copied!
Interesting Articles
Illnesses
Causes, Treatments and Symptoms of Oliguria