How To Manage Nosebleeds in Children

There are many "tips" that don't always help to stop nosebleeds, but there's an easy and effective solution. 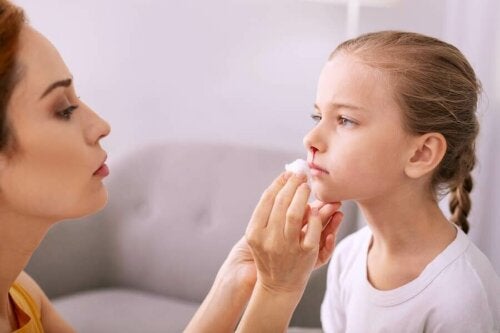 Nosebleeds in children are common, but they can also be scary because of how shocking it is to see blood gush out of the nose. However, they generally don’t signify any danger and can be easily stopped.

The most important thing is to stay calm and follow some simple recommendations. Normally, the bleeding will stop in a very short time. Only in some uncommon cases do you need to seek medical help.

Read this article to learn a little more about nosebleeds in children so that you can act quickly and correctly when they happen.

Why do nosebleeds happen?

The most common cause of nosebleeds in children is the rupture of one of the small blood vessels in the nose, causing the flow of blood known as “epistaxis.” There are various reasons for these ruptures, including:

When nosebleeds in children occur very often, the capillaries inside the nose may be irritated or they may not have healed well from a previous break. In those cases, a doctor may seek a more durable solution.

We also recommend seeking medical help if the bleeding is the result of an external blow to the nose or head. In rare cases, your child may have a blood clotting problem that should also be treated by a specialist.

What to do if there’s bleeding?

A very simple procedure is enough to stop nosebleeds in children:

There are also some popular beliefs that aren’t accurate, and that’s why we’re going to warn you about what you should NOT do:

See a doctor if you notice any of these symptoms

How to prevent nosebleeds in children

Finally, keep calm and use the methods described in this article. In case of complications or doubts, you can always go to the doctor.