How to Make Almond Milk to Lose Weight

Almond milk has healthy fats, amino acids and fiber that can help promote healthy weight loss. In addition, it has many other wonderful health benefits. 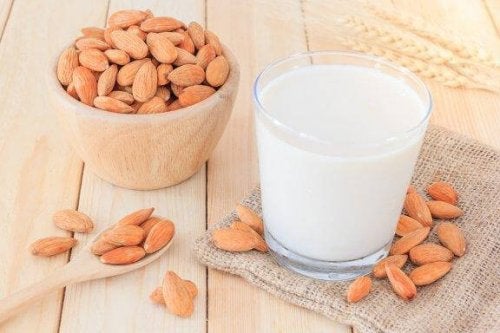 Many people have started drinking almond milk to lose weight. Although it’s a highly caloric drink when compared to other vegetable milks, it contains fiber, amino acids and healthy fats. Thus, it’s a great choice for any diet.

In addition, almost milk gluten and lactose-free, and it contains almost no cholesterol. It also contains a good amount of calcium, so it’s great for your bone health.

What other benefits does it have? How can you make your own?

Due to the boom that it’s had among Hollywood celebrities, you can now purchase almond milk at any supermarket. However, it’s always better to make the natural version yourself. That way, you’ll know that you’re getting all of its properties and are avoiding any chemical additives.

We’ll take a look at the benefits of almond milk and how to make it at home in this article.

The Benefits of Almond Milk to Lose Weight

Almond milk has become very popular around the world as one of the best substitutes for cow’s milk. Not only is it highly recommended for those with a lactose intolerance and vegans, but also for those who want to watch their weight and take care of their health.

From a nutritional point of view, it stands out because of its omega 3 fatty acids, a type of healthy fat that protects your heart health. This nutrient decreases the concentration of cholesterol in the arteries and helps with your metabolic functions.

It also contains a small amount of complex carbohydrates, a macro-nutrient that helps you achieve optimal energy levels. Also, its slow assimilation keeps your metabolism active and prevents spikes in blood glucose levels.

Because of its calcium and magnesium content, drinking it regularly will also strengthen your bones. Although it doesn’t contain as much of these nutrients as cow’s milk, there is enough to meet your daily requirements.

Another reason to drink almond milk to lose weight are its amino acids. As some may know, these nutrients are key to losing weight and increasing muscle mass. Its proper assimilation will improve athletic performance and the risk of injury.

How to Make Almond Milk to Lose Weight

It doesn’t require a lot of time or effort to make almond milk to lose weight. Also, it’s a lot healthier than buying pre-packaged milk at the store. That’s because it doesn’t contain preservatives or chemical additives.

Note: You can also add a little cinnamon and honey.

How to Use the Rest of the Almonds

After straining the almond milk, you’ll have a fine flour that can be reused. In fact, it will be great for another healthy recipe for your diet. However, you’ll have to store it a specific way.

Although using almond milk to lose weight can be very beneficial, you shouldn’t overlook its negatives. If you suffer from a metabolic disorder, are pregnant or have specific diseases, you should talk to your doctor before drinking it.

In conclusion, making almond milk to lose weight can be very beneficial. However, under certain circumstances, drinking it can have negative effects.