How to Identify the Signs of Woodworm

The signs of woodworm aren't easy to detect even though this pest might live inside the wood for many years. When you're finally able to verify their existence, it's most likely because the structure is already seriously damaged. 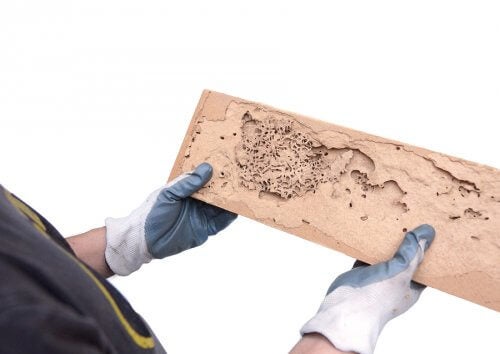 It’s important to learn to recognize the signs of woodworm because this pest can do considerable damage. Unfortunately, it isn’t always easy to do so, because the holes and tunnels created by the larvae aren’t visible until after the damage is already done.

That’s why you must take action to prevent and detect it as soon as possible. In today’s article, we’ll tell you more about this pest and how to detect it early.

The signs of woodworm

Woodworm is the name given to the larvae of various species of beetles especially known for gnawing, drilling, and deteriorating wood. In fact, these larvae are xylophagous — they feed on wood.

When feeding, these bugs gnaw on the wood and create tunnels inside of it, seriously damaging its structure. Thus, you must be on the lookout for these creatures to try to keep them from making themselves at home in your furniture.

The types of wood where you might find signs of woodworm

Woodworm is a bug that likes to live around humans. That is, it usually appears in human-made wooden structures, so they don’t really have an extensive natural habitat.

In fact, woodworms prefer slightly humid woods, in places far from excessive cold and heat and also from water. For this reason, it’s really strange to find it in live trees or in forests.

Thus, a woodworm pest is more likely to occur:

Woodworms aren’t easily detectable in the early stages. This is because their holes and tunnels barely reach 3/16 inch in diameter. However, they progressively get bigger and can reach up to about 1/2 inch.

Also, the characteristic noise these insects make when chewing is almost imperceptible by the human ear. Thus, this pest is usually only detectable by the dust it creates when it makes its characteristic holes, mainly when these are already visible. Unfortunately, the woodworm is quite widespread when you’re able to see these signs.

It may sound unbelievable, but woodworms actually colonize the wood and deteriorate it when they’re still in the larval stage. They feed on the wood for years and then undergo a process of metamorphosis to become flying beetles. These then move outside and live there for a few days.

They only live long enough to lay their eggs in other yummy pieces of wood. Then, they die.

How to find out if the pest is still alive

As we explained above, to detect a woodworm pest you must take into account the existence of:

However, the mere presence of these doesn’t mean the woodworms are still inside. Indeed, they might be signs of an old infestation and the bugs are no longer there. The larvae can live in the wood and feed on it for years. So, when you notice there are sawdust and holes, keep the following into account:

We recommend you read Five ideas to recycle wood furniture

How to treat a woodworm infestation

There are several methods to get rid of woodworms:

Similarly, there are home remedies against woodworm that are sometimes effective:

How to prevent woodworm infestations

It’s important to take the following into account when trying to prevent the appearance of woodworm.

The accumulation of moisture in the wood makes it softer and, therefore, more palatable for woodworm.

Thus, even though this remedy won’t entirely keep woodworms from penetrating, a thick coat of varnish is definitely a safety barrier against this pest. In fact, there are varnishes on the market for this specific purpose.

Finally, there’s nothing better than doping regular checkups on your furniture and wooden structures to detect the presence of this pest as soon as possible.

As we explained above, you could definitely detect any woodworm tracks but it might be too late because the pest may have already caused serious damage to a given structure. As you can imagine, it’s easier to prevent it.

Don’t hesitate to hire a professional to do so.

How to Get Termites Out of Your Home
Anything made out of wood -- whether it's a piece of furniture or the floors -- is vulnerable to termites, especially in damp areas. So how can you get rid of them? Read more »
Link copied!
Interesting Articles
Home tips
5 Tips on How to Wash Your Bedspreads

Home tips
Types of Heating Systems and Their Pros and Cons

Heating systems are quite useful for staying warm when cold temperatures invade our homes. There are many ways to warm…

Home tips
How to Freeze Basil and Keep it All Year

Basil is a fresh and aromatic herb that we use when cooking to give our meal a special flavor. Since…

Using pumice has become popular because of its many benefits. They come in all shapes, sizes and colors. This volcanic rock is also known as pumicite in its powdered or dust…

Home tips
Vinegar as a Disinfectant Around the House

Surely you've heard that vinegar is a great disinfectant around the house - besides being an extraordinary culinary compliment, of…