How to Help Your Child Cope with Death

Although death is a natural part of life, we suffer the most when a loved one dies. With children, we have to help them cope with death and express the pain they feel. 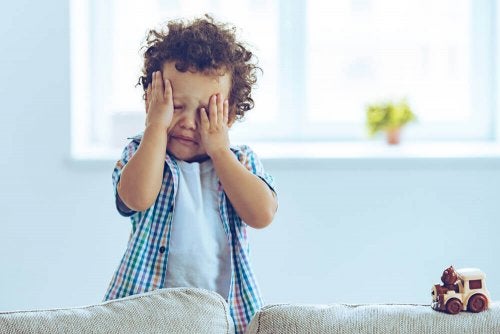 Death is part of life. When we become attached to a loved one that dies, it upsets everyone that loves them. Helping your child cope with death can be difficult because they do not understand the significance of the loss and they need us to help understand that they must express their feelings without fear.

The concept of ‘death’ depends on age

A child’s understanding of the meaning of death depends on their age. For a baby up to 2 years old, the child only perceives the absence of the deceased person. After 3 years, children may believe that death is temporary and reversible. Between the ages of 5 and 6, they can understand that it’s permanent and they understand the difference between life and death.

They know that people can die, but it’s not until the ages of 8 or 9 that they realize that they can die too. After 10 years of age they can fully understand the meaning of death.

When a child has to face the death of a loved one, their reaction will differ depending on the reactions they observe in the rest of their family. In families that speak openly about the subject, the child will have the opportunity to express his pain and sadness. For families who consider death to be taboo, it will be more difficult for the child to face because they won’t know how to express what they feel.

Some children can express their pain in silence and others will show their sadness. On the other hand, some may behave uncontrollably and defiantly. There may also be signs of emotional regression, anxiety, anger and depression. It will also depend on the relationship they had with the deceased relative.

Depending on the age of the child, reactions to death can also happen in school. Problems such as lack of attention and concentration may occur, difficulties with memory (forgetfulness is frequent) and school performance may decrease.

You may be interested in: When Childhood Stress Is Caused by Parents

Methods to help your child cope with death

Just as the child’s age influences how they cope with death, how close they were to the relative is just as important. The death of a grandfather, grandmother, uncle or cousin will not be as traumatic as the death of a parent or a brother. However, where possible, it’s important to help them face death, express their pain and begin the grieving process to overcome the loss of that loved one.

Let them know as soon as possible

There isn’t a perfect time to tell them about the death of a loved one. It has to be done as soon as possible to help a child cope with the death of a relative. If it’s the mother or father that died, it’s better if the living parent breaks the news. If it’s too devastating for you, perhaps the responsibility should be given to another close relative.

Grandma did not “leave.” Children must clearly be told that death is final. Answer all their questions in the most natural and calm way possible. Use appropriate language for their age, you have to make sure the child understands.

You don’t need to give the child information they didn’t ask for. If it’s an elderly person or a sick person, explain that we will all die after growing old or getting sick. You can also explain, if it was an accident, that what happened affected the body of the deceased.

Allow them to express their feelings

The death of a father or mother creates great emptiness. The surviving parent should try to cover all the emotions or emotional needs of the child upon receiving the news or during the funeral. In other words, the child may need your shoulder to cry on. Others will need to talk. They can even play or be hyperactive at the funeral. Allow them to move freely. It’s possible that, while playing, it’s distracting them from overwhelming emotions.

Some parents think that they should protect their children from death. They aren’t allowed to attend funerals, nor cry, nor talk about the deceased. They even invent stories about death to supposedly protect children from pain.

Despite these good intentions, it doesn’t help children. Young ones need to express their feelings and talk about how much they miss the deceased relative.

Express your own pain

It is good for your child to see your mourn over the death of your loved ones. Seeing you openly express the pain that overwhelms you will help you express what you feel about the loss of that beloved family member. Being able to express your own feelings is a way of helping your children cope with the death of a relative.

Crying is necessary and natural when you feel such a great pain for the loss of someone you loved. What you need to be careful of is not to frighten your children. Children shouldn’t see you at breaking point otherwise they’ll worry that they’ll lose you too. The way you manage your pain will help them overcome the loss.

Saying your goodbyes is vital for starting the grieving process

Whether or not the child should attend the funeral of a loved one will depend on the family and the child. If they’re old enough, it’s important to explain what happens at a funeral. Children can decide whether they want to attend and that’s OK.

Children that do decide to attend a funeral may want to leave at any moment. Respect their decision; don’t force them to be there. In this case, it’s good that you talk to someone you and your child trust, so that if they want to leave they can.

In any case, try to let the child say their goodbyes. If the child doesn’t want to attend the funeral, they can do this by writing a letter. They can also visit the resting place at a later date. Saying your goodbyes is vital for starting the grieving process and helps children cope with the death of a relative, but it doesn’t have to happen in front of the deceased relative’s body.

These office decoration tips will allow you to feel better in that area you spend many hours working in. No matter how big or small your office is, the most…

Home tips
5 Tips on How to Wash Your Bedspreads

Fashion and style
5 Tips to Help You Customize Your Clothes

If you want to stand out from the rest, you should personalize or customize your clothes. There are several ways…

Leather jackets are an essential item in any wardrobe. However, unlike other garments, they require special care to keep them…

Lifestyle
6 Common Mistakes to Avoid when Decorating the Kitchen