How to Care for the Elderly

Caring for an elderly person can be difficult, especially if you don't have the proper knowledge. However, it's not impossible. It can actually be a wonderful time. But what should you keep in mind? 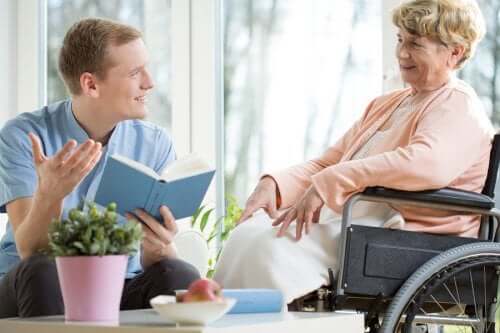 Despite the fact that our lifespans have increased, the difficulties during old age continue, especially in those who have lost a lot of their independence. For that reason, it’s important to learn how to care for the elderly in the best possible way.

Among the reasons why a person may lose their autonomy, or the ability to do some tasks, we have chronic and degenerative illnesses, which worsen as time goes on.

Some adults are considered ‘dysfunctional’ as they require support to do everyday tasks. When people reach old age, they’re also more vulnerable to illnesses, which means they require better medical attention.

According to the Care for the Elderly in the Federal District (Atención de Los Adultos Mayores en el Distrito Federal)’s manual of general care for the dysfunctional or dependent elderly, there are certain activities that the elderly may find more difficult to do individually. These activities are as follows:

How to care for the elderly

Facing these difficulties, it’s normal to ask yourself how you can care for an elderly person. As many people don’t feel prepared, it can be difficult to have a positive attitude when getting started. Some suggestions for providing company to elderly people are as follows:

How to care for the elderly: listen to them

Elderly people may tell the same story a million times. Although everyone else may know how a certain story ends, it’s important to remember they don’t have any new experiences to talk about, and this is one of the reasons why they always recount the marvelous stories from their youth.

Another reason may be that their memory isn’t what it used to be, and they don’t remember that they’ve already told this story, so they tell it again with as much enthusiasm as they did the first time.

You may also be interested in: The Role Family Plays in the Treatment of Alzheimer’s Patients

How to care for the elderly: make them feel useful

It’s important that elderly people exercise their minds; by not doing so, they may suffer premature aging. It’s vital you allow them to do simple tasks without putting restrictions on them. For example, even though they may not be able to make a meal, ask them to wash the potatoes in preparation for someone else to cook them.

If the elderly person can’t do the laundry, get them to fold some of the clothes or separate the colors. It’s a good idea to assign them simple tasks so that they feel useful and can move around.

Support them on visits

For elderly people, visiting family or friends that they haven’t seen in a while without can improve their mood.

Surround them with their things

Whenever possible, you should allow them to sleep in their own bed and live in their own house. Changes aren’t always easy for them. It’s easier for us to adapt to their lives than it is for them to adapt to our lives, house, or other objects. Being among their things can help them feel they’re in a familiar environment and that they own their space.

Don’t berate them if they get angry

Getting old isn’t easy, especially when you realize you can’t do something that you used to be able to do easily. If something isn’t going right for an elderly person, it’s normal that they’ll feel angry. It’s important that those caring for them keep calm and be patient, allowing them time to calm down.

Remember that it’s not easy for elderly people to watch themselves lose their faculties and see their bodies becoming less capable. This frustrates them, and the best thing to do is to help them feel better and not leave room for their frustrations to develop.

And help them to feel motivated to do them! They may like to listen to music; program their radios to turn on every morning so they can listen to their favorite songs.

Be kind and remind them how much you love them. Don’t get angry if they can’t complete a certain task. Smile reassuringly, especially if they seem tired or sad. Some elderly people may feel bad when they think about how much work they are for their carers. Reassure them that that’s not the case.

Remember that one day they won’t be here anymore and you’ll miss them. Take advantage of these times and share happy memories with them; tell them jokes and anecdotes. Make them feel happy to see you.

In addition to this advice, remember to celebrate their birthdays; get them to blow out the candles and give them a gift filled with love. Take photos with them and tell them how great they look.

How to care for the elderly: empathy is key

The most important thing that you can remember is that if, at some point, you’re not sure how to act, just take a moment to imagine yourself in their shoes.

Imagine that you’re the elderly person in this situation and you’ve lost part of your cognitive functions, or maybe you feel sick, and ask yourself what kind of care you would like to receive.

The answer to this question will be how you should proceed with these special people that have given you everything in life and now only need a little bit of love and support.

How to Prevent Arthritis in Your Hands: 5 Tips
Arthritis is a disease that causes pain and discomfort in the joints. To prevent arthritis in your hands, try out the following tips. Read more »
Link copied!
Interesting Articles
Healthy habits
Ways to Prevent Falls in the Elderly