How to Identify Allergic Reactions to Drugs

It's unclear why some people are allergic to some substances and not to others. Allergic reactions to drugs aren't frequent and rarely occur the first time they're taken. In this article, we'll tell you more about it. 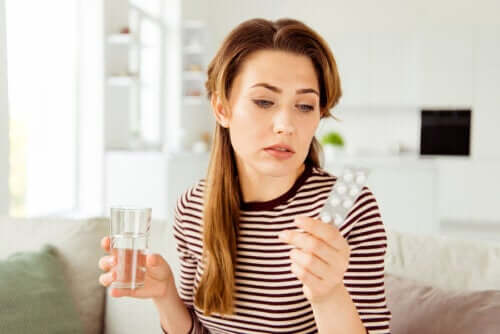 In many cases, people suspect they’re having allergic reactions to drugs after taking some medication. However, this isn’t usually the case. Rather, it’s more than likely just one of the side effects that all medications can cause.

Sometimes, you may think that the medication gave you an allergy when you develop mouth sores or diarrhea during or after antibiotic treatment. However, these are side effects that result from the alteration of the bacterial flora.

In addition, if you take the tests to confirm that a drug gave you an allergy, you don’t need to repeat them from time to time. Would you like to know more about this topic? In the following paragraph, we’ll tell you what you need to know.

Did a drug give you an allergy?

An allergy is the body’s reaction as an exaggerated response to contact with an external substance–an allergen. It’s unclear why some people are allergic to some substances and not to others.

People over the age of 40 are more likely to have an allergic reaction to a drug. This is because, due to their age, they may have been more exposed to drugs, as they may need them more frequently than younger people.

How can you identify allergic reactions to drugs?

When you take a medication and it gives you an allergy, symptoms vary and allergic reactions can be of two types. It’s best to stop taking the drug as soon as the suspected allergy appears.

This type of reaction includes those that occur as soon as the drug is taken. They usually occur when you take the first or second dose and half an hour to an hour has gone by.

Non-immediate or delayed reactions usually affect the skin. The most common is a rash, which may appear up to two weeks after taking the drug. It’s characterized by a reddish color and itching that spreads to different parts of the body.

If a drug gave you an allergy, you may have suffered from hypersensitivity reactions. These are less frequent and more severe, and may even cause burns on the skin. In these cases, hospital admission may be necessary because there’s a risk of death.

What other type of reaction can a drug cause?

In this section, we’ll address what are called predictable or type A reactions, which are the most frequent. They’re produced by the pharmacological action of the drug and may be due to the following causes:

In general, by reducing the dose, the symptoms disappear and you can use the drug when you need it without any risk.

Another type of reaction that can occur is the so-called unpredictable or type B reactions. These reactions are related to pharmacological intolerance of the drug or to pseudo allergic reactions.

A pseudoallergic reaction is one in which, based on the symptoms, it would appear that the drug gave you an allergy. However, there’s no immunological basis to prove it.

What to do in the case of allergic reactions to medication

As soon as it’s confirmed that there’s an allergic reaction, measures must be taken to treat the symptoms. However, these are different depending on whether it’s an immediate reaction or a delayed reaction.

In immediate reactions, drugs such as adrenaline, corticosteroids, and antihistamines are used. In addition, pharmacological treatment is used to treat the symptoms of the most affected organs. Drugs include bronchodilators and cardiotonics.

However, in non-immediate or late reactions, treatment is mainly based on the use of corticosteroids. The route used to administer them depends on the symptoms. In the case of contact dermatitis, they’re applied topically.

Read: Uses and Contraindications of Loratadine

Remember that if you use the drugs correctly, that is, when the drugs are necessary and with a doctor’s prescription, it’s easier to avoid an allergic reaction to them.

How to Prevent Abuse of Prescription Medication
Abuse of prescription medication can have terrible consequences, and it is a serious public health problem around the world. Read more »