How Does a Person with Color Blindness See?

Color blindness is a genetic disease which alters the perception of colors. People with color blindness can have different levels of severity, and different ways in which colors are interpreted in their brains. Do you want to know more about it? Keep reading! 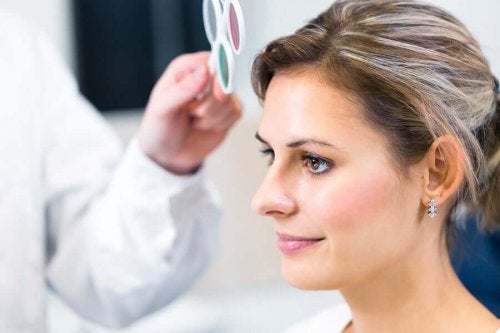 Color blindness is a disease that changes your perception of colors. The human eye can interpret the color of things through light waves that get to the retina of the eye.

In the retina, there are specialized cells that are called cones. The cones have pigment inside them, and there are three different kinds for sensing red, green, and blue. The combination of these three pigments provides a wide range of colors, to allow you to see the world in color and not black and white.

Once the light wave’s information makes it to the cones, the signal continues through your optic nerve. You have two optic nerves, one behind each eyeball. The paths of both combine in the optic chiasm and reach the brain so that the neurons can make the final interpretation of the information.

In color blindness, the person doesn’t perceive the color normally. Although the light wave is the same, in a color-blind person the information is interpreted incorrectly. It’s estimated that this condition affects approximately 8% of men and 0.5% of women.

What is color blindness?

The disorder known as color blindness is a genetic disease. It’s inherited through the X chromosome, which is one of the sex chromosomes. Because of this, it is more common in men than in women.

Color blindness is defined as the inability to discern colors. Under this definition there are many variants of the disease, from light changes in range that are almost imperceptible to a changing of one color for another.

In general, there are three classic forms of color blindness:

Keep reading: How to Detect Vision Problems in Young Children

Other causes of color blindness

Although color blindness is a genetic disease linked to the X chromosome, other conditions can include it as a symptom. Among these diseases are:

How does a person with color blindness see?

We have to clarify that a color-blind person doesn’t just see shades of gray or black and white. However, they might see a desaturation of tones.

They might also confuse colors, which is often misunderstood as confusion for other people who don’t have changed cones. However, for a color-blind person, it’s nothing like confusion, but rather a different way of interpreting color. They have always seen that way, since birth possibly, and that’s their perception of reality.

The tests they do in ophthalmologists’ offices to diagnose it are varied and subjective. The patient has to say what they see and the colors that they think they are seeing so that they can compare that to the norm. The most famous test is the Ishihara test, composed of cards with numbers made of dots of color. The difference in dots of color are subtle, and they assume that a person with color blindness would have difficulty distinguishing between the colors.

Discover more: Everything You Need to Know About a Detached Retina

What should I do if I think I’m color-blind?

If you think you might suffer from color blindness, it’s important that you see an ophthalmologist. The doctor will do the proper tests and determine if you have an alteration in your perception of colors. In general, there’s no reason to worry. The majority of color-blind people lead a very normal life.

5 Things Your Eyes Say About Your Health
Your eyes are the windows to your soul. They help you see how others feel and tell you many things about their health condition. Read more »
Link copied!
Interesting Articles
Anatomy and physiology
Normal Prolactin Levels and Why They Can Change