Daylight saving time can lead to effects that are more noticeable in some people than in others. To prevent these effects from happening, it’s best to expose yourself to sunlight during the day, try not to take naps, and maintaining a regular routine. In three days, the body adapts. 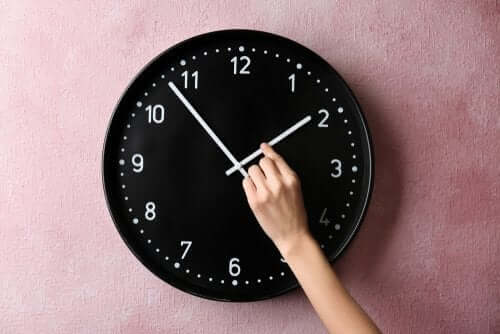 There have been several interesting studies on how daylight saving time affects the body. However, none has been truly conclusive. What’s clear is that this change exerts varying effects from person to person and can become very bothersome for some.

The topic of time change has always sparked a lot of debate. The practice began in Europe during World War I. The main reason for it was the argument that it allowed for the saving of energy.

Daylight saving is done in late March during the summer months and the last Sunday in October for the winter months.

In theory, it’s intended is to make the most of sunlight to promote energy saving. However, studies show that the energy saved in the morning is used in the afternoon. Likewise, workers become less productive as they adjust. Perhaps it doesn’t save as much energy saving as it would seem!

Some studies indicate that cultures that don’t have electricity have a similar routine to those who do. Also, experts believe that our ancestors also slept similarly as we do now. This means that, by nature, we all tend to have similar sleep patterns. This is because all living beings, even the simplest, regulate many of their functions in 24-hour cycles. In them, light and darkness are decisive factors.

In 2011, a team of researchers from the Centre for Genomic Regulation (CRG) in Barcelona discovered that cells distinguish between day and night and that this is crucial for their operation. This circadian rhythm regulates sleep-wake cycles and all the related functions. When these cycles alter, it causes an imbalance in the body and can lead to various problems. The human body enjoys routines, as they help it work better.

This article may interest you: How to Feel Less Tired and Weak When You Wake Up

Daylight saving time causes a sort of “jet lag.” Jet lag is the name given to the discomfort that arises when a person travels to a place with a very different time zone. Daylight saving time confuses the body, causing a bit of chaos. The change in the hours of activity and rest causes tiredness, drowsiness, and irritability.

Some people experience it more severely than others. These symptoms are because the immediate effect of this change is an alteration in melatonin secretion. Melatonin is a hormone that acts depending on the sunlight. When there’s more light, there’s less melatonin. On the contrary, the body produces more of it when there’s less light to induce sleep. This practice causes deregulation of this hormone, which causes the symptoms we explained.

However, in most cases, the body takes approximately three days to achieve balance.

You should also read: 4 Melatonin-Rich Foods

Also, some descriptive studies have noted that this practice slightly increases the number of myocardial infarctions (heart attacks). In turn, the change in autumn makes this figure decrease. Meanwhile, another study indicates that, during the days after daylight saving time, there’s an increase in the suicide rate.  Also, studies indicate that, after daylight saving time, the number of both work-related and traffic accidents increases. There’s statistical evidence that, on the Monday following the practice, work-related accidents tend to be more serious than at other times.

However, it’s important to note that heart attack, accident, and suicide rates increase only slightly. Nevertheless, these are interesting facts to keep in mind to encourage you to make sure to adapt to this change in the healthiest way possible.

How to Regulate Melatonin and Sleep Better
In this article, we'll explain how to regulate melatonin, the hormone responsible for regulating many biological functions. Read more »
Link copied!
Interesting Articles
Anatomy and physiology
Cardiac Stress Test: What Is It and How Is It Performed?