How Allergies Have Developed

The prevalence of allergies has increased globally, especially in young people. But how have allergies developed on an evolutionary level in humans? Find out in this article! 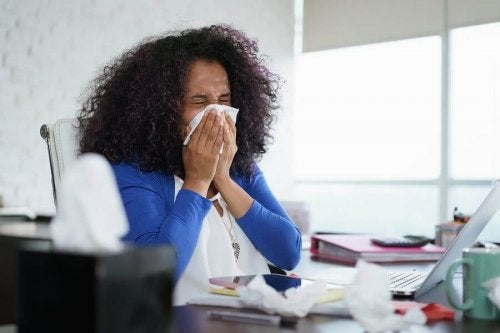 Many people have experienced the misfortune of an allergic reaction. These types of reactions are becoming more and more common since it’s estimated that 30 to 40% of the world population has suffered from an allergy at some point. But how have allergies developed?

It’s not all bad news, because, no matter how bothersome they may be, allergies could have a unique evolutionary meaning.

Allergies are an immune reaction against a substance that’s generally harmless to the host, which is manifested by characteristic signs and symptoms when it’s exposed to them. The antibodies of the immune system of the person who’s suffering from this pathology recognize harmless agents from the environment as potential dangers.

Thus, it acts accordingly to expel them. This causes inflammation of different degrees in the paranasal sinuses, the skin, and the digestive system, among others.

This is why the existence of allergies makes us wonder why our immune system boycotts us in harmless situations. To know more about this, below we’ll talk about the role of allergies in human evolution and development.

How allergies have developed

The true purpose of allergic reactions continues to be a topic of debate and research today. The hygiene hypothesis proposes that allergies have spread globally due to a lack of exposure to real pathogens.

A study published in Plos Computational Biology states that proteins found in elements that have daily contact with humans are similar to those of body parasites. The lack of immune system activity in contact with this type of harmful living being could make it detect any other similar signal as a potential danger, causing the reaction in question.

The previously named study has evidence to support this hypothesis:

Although these results are simple, they yield a lot of information. The lack of real alarms may make the immune system make its own.

To find out more: Everything You Need to Know About Allergy Shots

An answer that perhaps isn’t so accidental

We could stick with this possible explanation since it seems convincing and scientifically proven. However, other currents defend different theories.

Some studies collected in this article published in the Scientific American journal suggest that these reactions aren’t accidental at all. They propose that allergies could protect us from the toxins present in the environment:

What could this mean?

If we interpret the results, it isn’t unreasonable to think that through vomiting, shortness of breath, and other symptoms, our body is preparing us for real dangerous situations. Our immune system could be preparing us for other more severe future reactions and, at the same time, communicate that we should try to avoid these allergic substances.

This theory suggests that allergies have developed as evolutionary mechanisms in humans. Based on experience with harmless agents, as a species, we could have learned to avoid riskier situations. Furthermore, these small allergic episodes could train the immune system against serious dangers.

This article may also interest you: The Causes of Allergic Reactions and Allergy Symptoms

Why an allergy develops, so does an unanswered question

As you’ve seen throughout this article, there are various theories regarding the emergence of allergies. There are no certainties or facts but, instead, different ways of approaching a global phenomenon.

Nevertheless, the true reason for the development of allergies remains unknown.

Allergy Tests: Types and Procedures
There are several different types of allergy tests. Generally speaking, they are medical tests that include a set of procedures that identify allergies. Read more »
Link copied!
Interesting Articles
Illnesses
Diabetes in Children and Adolescents