Hot Flashes in Menopause: What to Do about Them

The vast majority of women experience hot flashes in menopause. This is typically due to the hormonal changes characteristic of this stage. In most cases, the frequency and intensity of these hot flashes decreases with age. 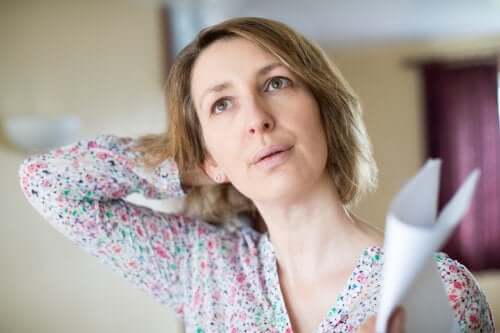 Hot flashes during menopause are a common symptom in women going through this stage of life. It’s an unpleasant symptom which, in many cases, is present during several years, causing discomfort to the women who suffer from them.

These hot flashes often occur during the night. In this case, they’re called night sweats, and they can affect one’s quality of sleep. A lot of women feel that this symptom affects their daily lives.

According to various scientific studies, certain ethnicities tend to suffer more years of hot flashes than others. If the hot flashes are mild, they barely require treatment. But when they manifest severely, they demand special measures.

Hot flashes in menopause are characterized by a sudden feeling of heat in different body parts. They often worsen during the night, disrupting sleep.

Hot flashes in menopause are the main reason for medical consultation during this stage. Most commonly, they begin as a sudden feeling of heat that starts in the face and chest and then spreads throughout the body.

They usually last between two and four minutes and occur at any time without notice. Some women also sweat and have chills and tremors at the end of these episodes.

Other women experience palpitations and a strong sense of anxiety during hot flashes. Although they typically occur once or twice a day, it’s also possible for them to recur frequently, even once every hour.

It’s common for these hot flashes to begin to occur during premenopause. After menopause itself, they usually keep occurring for an average of five to seven years, although their intensity decreases over time. However, some women suffer from them for up to ten years.

Causes of hot flashes in menopause

Science doesn’t know the exact reason why hot flashes occur during menopause. However, it’s believed that they’re caused by abrupt hormonal fluctuations that occur during this stage. Apparently, decreased estrogen levels cause the brain’s vasomotor center to behave differently. This affects body temperature.

Experts have established that emotional stress affects the intensity and frequency of hot flashes. In addition, large meals, alcohol intake, and tobacco consumption exert a strong influence on these episodes.

It’s estimated that 80% of women have these episodes during menopause. However, only one in four women suffer from intense and frequent hot flashes. For others, it’s a symptom that goes unnoticed or can be managed with the use of a simple fan.

How to manage hot flashes

To manage these episodes, your doctor may suggest lifestyle changes and medications.

Medical treatment for the management of hot flashes in menopause is hormonal. In some cases, doctors prescribe hormone therapy that consists of estrogen intake. However, this type of treatment entails potential risks, which is why each case should be carefully evaluated by a physician. Experts don’t recommend hormone replacement therapy for more than two years.

In other cases, experts recommend therapies that consist of low doses of antidepressants. However, they aren’t as effective in controlling severe hot flashes as hormone therapy. Likewise, antidepressants have various side effects such as dizziness, nausea, dry mouth, weight gain, and reduced sexual desire.

In some cases, doctors may prescribe anticonvulsants to relieve symptoms in some women. As of late, a procedure called “stellate ganglion blocks” is being used for the most severe cases. This procedure involves applying anesthesia in several nerves in the neck. Its effectiveness is promising, but not entirely proven.

This article may interest you: Effective Natural Remedies to Treat Menopause

Hot flashes in menopause don’t necessarily have to be treated with drugs. In most cases, home remedies are enough. They rarely occur for longer than expected or require special treatment.

Likewise, it’s appropriate to wear light, natural fiber clothing and maintain all rooms well-ventilated. Many professionals recommend the continued practice of relaxation exercises such as yoga or tai chi since stress is a factor that worsens hot flashes.

Tips to Transition into the Changes of Menopause
Menopause is a natural part of every woman's life. If you are unfamiliar with the changes of menopause, then you should read this article. Read more »
Link copied!
Interesting Articles
Anatomy and physiology
Differences Between Menstruation and Implantation Bleeding