Honey and Babies: A Dangerous Combination

Honey and babies shouldn't mix. This is because this type of food naturally carries Clostridium botulinum, a motile bacterium whose proliferation in the still immature digestive system of a newborn can lead to the release of the neurotoxin botulinum. 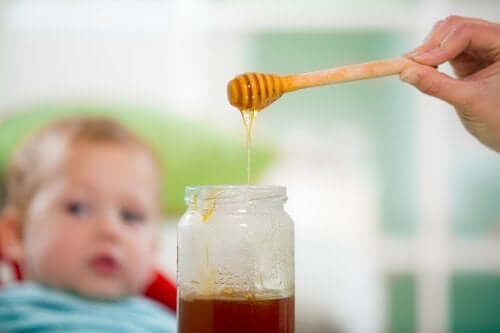 Do you know why honey and babies are a bad combination? After all, isn’t honey, with its unmistakable sweet flavor, one of the healthiest and most nutritious types of food in the world? Didn’t our parents and grandparents moisten our pacifiers in a little bit of honey to keep us happy?

All of this may be true. However, scientific studies found that this is a dangerous practice. Doctors now advise to never, ever, under any circumstances give honey to babies under twelve months of age.

Human beings have been eating honey for thousands of years. It’s natural and nutritious food, and its benefits are multiple and well-known. From ancient Egypt to the present day, honey has always been an ingredient called for in all kinds of recipes. This is because of its many properties and sweetening qualities.

Unfortunately for babies, however, this natural product also contains Clostridium botulinum, a motile bacterium that releases a neurotoxin that can be highly dangerous for babies under one year old. The reason is simple: a baby’s gut microbiota hasn’t yet matured, and the spores of this bacterium can easily proliferate in their intestines. Then, they proceed to release botulinum toxins, currently considered some of the most deadly substances we know.

This is what we refer to as infant botulism, a type of botulism that mainly affects children under twelve months and can be lethal. However, it doesn’t affect them the same way after their first year of age. This is because their natural defenses have developed and are then able to prevent the proliferation of bacteria.

We recommend: The Causes of Constipation in Babies

Clostridium botulinum is a bacillus that’s naturally present in dirt. Therefore, it could be present in virtually all types of food, both plant, and animal origin. This bacterium organizes in spores and can remain dormant until it finds the ideal conditions to multiply and grow.

It’s particularly present in homemade preserves, as it prefers low-oxygen environments. However, it generally doesn’t tolerate acidic ones. Also, it cannot thrive in solutions with high concentrations of sugars. It’s for this reason that it usually remains dormant in honey, waiting for the ideal conditions to reproduce.

Thus, when a baby under twelve months of age eats honey, the sugar in this nectar dilutes in their gastric juice. This is because it’s still a low acid environment with little oxygen. Therefore, the bacillus finds the ideal conditions to begin its proliferation and growth in this type of environment and releases its botulinum toxins. Subsequently, they reach the neuromuscular endings through blood flow and can lead to childhood botulism. This is a highly dangerous condition that requires immediate hospitalization.

Childhood botulism affects the nervous system, so it can present itself with a wide variety of symptoms. Usually, they appear about 12 to 48 hours after coming into contact with the bacteria.

The most frequent are:

A pediatrician will take into consideration the description of the symptoms as provided by the parents to determine if the child might have botulism. They’ll most likely do a stool analysis to check for the presence of botulinum toxins.

Likewise, it’s important to highlight that infant botulism requires immediate hospitalization. Studies have proved that it affects the nervous system and can lead to respiratory failure. For that reason, it’s necessary to hospitalize the baby and keep them under constant observation.

The success of the treatment depends on early diagnosis and timely administration of the botulinum antitoxin. In the most severe cases, a child may even require mechanical ventilation or intravenous feeding.

In most cases, infant botulism goes away after a few weeks or months as long as the baby gets immediate care. Only in the most extreme cases can the action of the toxin result in death due to respiratory failure.

Is honey the only food that causes infant botulism?

Honey isn’t the only food that can lead to infant botulism. In fact, as we mentioned above, the bacteria responsible for this condition is widely found in nature. It’s for this reason that it’s quite difficult to identify the source of the spores. Naturally, honey isn’t the only carrier.

Indeed, botulism bacteria live in the dirt and spread around through dust that transports through the air. So, a baby could easily breathe it in. This is why doctors recommend not to expose the little ones to environments where there’s too much dust. Also, it’s a good idea to keep them away from any place where people are moving dirt around.

Due to the severity of botulism and the difficulty eliminating this bacteria, you must remain attentive to any outbreaks of this bacillus near you to avoid contagion and even possible epidemics. In this regard, the WHO seeks to ensure safety and promote surveillance, detection, risk assessment, and disease containment.

As you can see, although botulism outbreaks are rare, they’re always a public health emergency and priority. Local authorities must establish ASAP if the outbreak is natural, accidental or deliberate. This is the only way to prevent new cases from arising and to effectively treat those who are already ill.

So, the main measure to avoid honey induced botulism is to keep it away from your baby until they’re one year old. However, you must take into account that the disease can appear by other means of infection. Also, because there’s no vaccine against this bacteria, prevention is always the best measure.

To do so, pediatricians advise:

We recommend you read: What Foods Should You Not Feed Your 9 Month Old Baby?

Babies shouldn’t eat honey because regardless of its sweetness and wonderful nutritional properties, the risk of botulism is very high in children under the age of one. This is because their immune system isn’t sufficiently developed yet. Therefore, it’s defenseless against the microorganism that causes this disease.

Finally, you must be attentive and keep in mind that honey isn’t the only carrier of botulism. So, follow proper hygiene guidelines and the recommendations from experts to keep your little ones healthy and safe.

Botulinum Toxin, a Lethal Poison
Botulinum toxin is an exotoxin produced by an anaerobic bacteria called Clostridium botulinum. Exotoxins are molecules secreted extracellularly by some microorganisms that are capable of causing a lot of damage to its host. Read more »
Link copied!
Interesting Articles
Babies
Discover Why Babies Stare