What Is Hip Impingement? What You Need to Know

Hip impingement is an injury that causes pain when bending or rotating the legs. In addition, it significantly limits the movement of the affected individual. 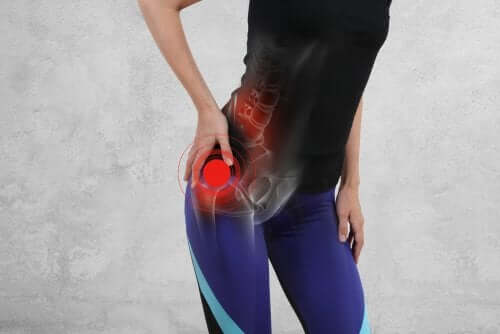 Hip impingement is a recently described pathology that’s also known as femoroacetabular impingement. This name is due to the fact that involves the alteration of the two main components of the joint: The femoral head and the acetabulum.

In other words, hip impingement is a pathology that incapacitates young, active people, such as ballet dancers and those who practice martial arts. It starts with a pain in the groin that extends and worsens. Early treatment of this pathology will be able to avoid many complications.

Because of its frequency and importance, in this article, we’ll explain everything you need to know about hip impingement.

Why does hip impingement occur?

As we’ve mentioned, another name for this pathology is femoroacetabular impingement. To understand it, we must first get to know the anatomy of the hip joint.

The hip is a joint that consists of the acetabulum (which is a concave part of the pelvic bone) and the head of the femur (convex), which is the main leg bone. They’re two spherical surfaces that, to the naked eye, give the image of a ball that rotates inside a socket.

This causes the so-called hip impingement. The alteration of some of its parts makes the contact irregular. When both parts collide continuously, it injures the articular cartilage. In time, the joint can degenerate further and cause osteoarthritis. In fact, impingement of the hip is one of the main causes of hip osteoarthritis in young adults.

What are the causes of this pathology?

First of all, an alteration in the development of the joint in childhood can cause hip impingement. This occurs in numerous pathologies such as acetabular dysplasia or Perthes disease.

However, half of the people who have an alteration in the anatomy of the hip don’t even experience symptoms. Even so, they usually experience them as soon as they increase their physical activity or when they play certain sports.

Secondly, another cause of hip impingement is activities where there’s a continuous movement of the legs and hips. By continually repeating certain movements, the two parts of the hip collide and wear occurs. It usually affects people who practice rhythmic or artistic gymnastics, martial arts, or track.

What are the symptoms of hip impingement?

The symptoms appear after overuse of the joint, when damage to the cartilage has already taken place. They usually begin with pain in the groin that gradually increases. What’s more, this pain gets worse with movements involving the hip. For example, the individual experiences difficulties when it comes to squatting or crossing their legs.

Another typical symptom is joint stiffness in this area. This means pain isn’t the only factor that limits the movements of flexion and internal rotation of the leg. Stiffness in the hip also plays a role.

In addition, people who suffer from hip impingement also often experience a crunching sensation when they move. What’s more, they may even mistake the pain for sciatic pain and it may extend to the knee.

What treatment is available?

This pathology has a complex treatment that depends on the intensity of the injury and the pain it produces. After diagnosis, the first thing patients must do is modify the activity that has triggered this problem. When dealing with athletes, it’s important to reduce the activity and avoid hip flexion exercises. In addition, the patient should perform specific physical therapy exercises for the area.

Another treatment option is the injection of hyaluronic acid into the joint. This substance allows the cartilage to recover slightly and helps to relieve symptoms. However, when the injury progresses or significant osteoarthritis of the hip has taken place, treatment is usually surgical. Some of the options include hip prosthesis.

You may be interested: Exercises That Help Relieve Hip Bursitis

Hip impingement is a pathology that produces a lot of pain in young people and athletes who exercise a lot of force on the joint. Therefore, it’s important to go to the doctor as soon as possible to establish treatment and stop the injury from getting worse.

Rotator Cuff Tear: What You Should Know
A rotator cuff tear causes pain and limits shoulder movements. In this article, we'll take a look at what it is and why it happens. Read more »
Link copied!
Interesting Articles
Anatomy and physiology
Twelve Exercises to Overcome Shoulder Tendinitis