The objective of the different treatments of hip dysplasia is to achiev a reduced hip in a stable and safe way quickly and early on. 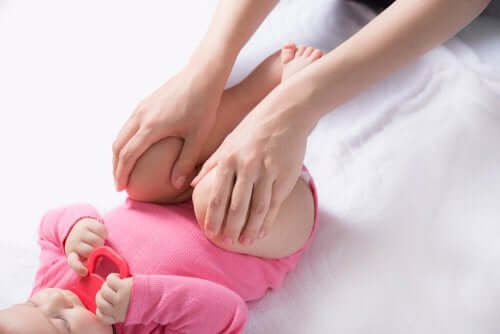 Hip dysplasia is a congenital disorder, which means that it appears at birth. This disorder affects the hip joint and has an incidence of one in every 1000 live births.

In normal situations, the hip consists of a ball and socket joint. When a person is born with hip dysplasia, the socket is usually shallow. This allows the ball-shaped area of the femur to slide in and out of the socket. The “ball” can then be partially or completely dislocated from the cup.

At the same time, it’s important to mention that most people who suffer from this congenital disorder are usually first-born babies and females. Family history of hip dysplasia favors the development of this problem.

Hip dysplasia, therefore, is a situation in which there’s a growth disorder at the level of the anatomical structures. This includes the soft parts of the joint.

Today, experts consider this disorder to be the consequence of eccentric pressures of the femoral head during the last month of pregnancy.

However, hip dysplasia is a disorder that’s considered “multifactorially inherited”. By this term, experts mean that several factors–both genetic and environmental–determined the birth defect.

For example, one of the environmental factors that experts believe contributes to hip dysplasia is the baby’s response to the mother’s hormones during pregnancy.

A narrow uterus that doesn’t allow for fetal movement or a breech delivery can also cause hip dysplasia. In addition, another fact to keep in mind is that the left hip tends to suffer the most. This is due to the position of the fetus inside the uterus.


The aim of the different treatments of hip dysplasia is to achieve, quickly and early on, a reduced hip pressure in a stable and safe way.

After achieving a reduction and restoration of the concentric pressure of the femoral head within the acetabulum, the roof of the acetabulum ossifies and develops again. This is especially true within the first two years of life, during which time hip dysplasia is largely reversible.

The indicated treatment will depend on several factors. These include whether the dislocation is typical or teratogenic, and the age or duration of dislocation, among others.

Treatment from birth to six months

After the reduction, the second stage aims to preserve the physiological position. For this purpose, professionals usually use different devices. The most common is the Pavlik harness.

This harness is a dynamic device that allows active movement of the hip within the safety zone. Thus, it allows the normal development of the acetabulum and the femoral head, as the hip moves in its reduced position.

The duration of treatment varies depending on the child. Once the treatment is complete, doctors must take X-rays to check if the joint is developing correctly.

Treatment from six to eighteen months


This treatment is necessary when the previous one has failed and in cases where the diagnosis has taken place later. Normally, the treatment in this period of time is surgery. The fundamental factor in the treatment of hip dysplasia is to achieve a concentric reduction of the femoral head.

Once this has been successful, the second step is to maintain the reduction and improve the stability of the hip. This may require the performance of osteotomies (surgical sectioning or cutting of a bone). Among them, there are several different types:

You may also be interested in reading: Diseases in Newborns that Require Surgery

Hip dysplasia is a disorder that’s more frequent in female babies than in males. It appears at birth, which is why it’s said to be a congenital disorder, and affects 1 in every 1000 babies born alive.

Today, this disorder is reversible, usually in a fairly simple way. However, in the case of late diagnosis, professionals usually choose to subject the patient to a surgical intervention.

If you have any doubts about this disorder, don’t hesitate to tell a professional so that he or she can tell you which is the most appropriate treatment for your situation.

All About Cleft Lip and Cleft Palate
In order to try to correct a cleft lip and cleft palate, many professionals with knowledge of many different areas are necessary. Read more »
Link copied!
Interesting Articles
Babies
Why Do Babies Drool So Much?

Neonatal abstinence syndrome (NAS) is a collection of symptoms experienced by babies whose mother has abused certain drugs during pregnancy. In reality, it can occur either before or after the baby…

Skin-to-skin contact, also called kangaroo care, should be performed right after delivery. It consists of placing the newborn on the…

The first week of August is World Breastfeeding Week, and you can find publications all over the media about the…