Although it isn't a deadly problem, sleep paralysis can cause suffering, so we should know how to recognize its symptoms and causes. 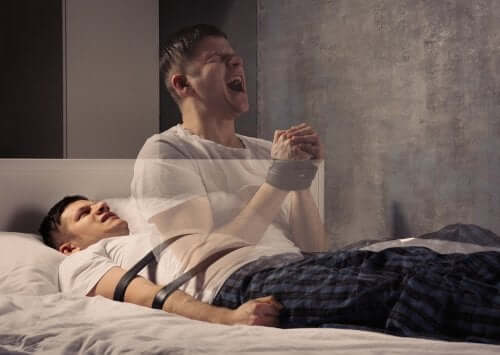 Maybe you’ve never heard anything about sleep paralysis, maybe you have. We want to tell you about it, what effect it has on your body, and what you can possibly do to avoid it.

It’s really not a serious illness. Scientists recognize it as a phenomenon that happens when your body is resting, generally while you’re sleeping. Scientists have placed it in an international classification of sleep disorders as a parasomnia.

What is sleep paralysis?

If you’ve ever woken up in bed and tried to get up, but couldn’t, you could have suffered from sleep paralysis. It’s a muscular condition that causes weakness or looseness in the muscles when you’re asleep. This effect temporarily prevents any muscle movement.

This phenomenon normally happens at the moment we fall asleep, or when we wake up. The effect has a very short duration; it can last between one and five minutes. Sleep paralysis can often make you very scared and distressed, in spite of being perfectly awake and lucid.

You won’t be able to move your muscles or even say a single word. Although it can be difficult, the best thing to do is to calm down and wait patiently until it wears off naturally.

Science also explains that this effect is caused by a small failure in the nervous system. The brain wakes from the sleep state, but, due to the deep state of relaxation, the body doesn’t obey the orders the brain sends for a short period of time. This explanation might seem too simple, which is why many people aren’t too happy about it!

Sleep paralysis can occur in a healthy individual without any prior notice, although it’s important to highlight that this doesn’t affect the person’s health. It’s a relatively common and ordinary phenomenon. According to one study, about 8% of the population could suffer from it at least once in their life.

In some cases, sleep paralysis is directly related to people who already suffer from narcolepsy. It’s an uncommon illness that causes sudden episodes of sleep that are impossible to predict.

These are the most common symptoms of sleep paralysis:

Why does sleep paralysis happen?

Sleep paralysis happens when the body and mind aren’t well-connected for a time. During the REM cycle we usually dream, and our bodies can become completely paralyzed due to the muscles relaxing we rest. Glycine and GABA (gamma-aminobutyric acid) are two chemicals that help cause this “paralysis” so that we don’t move during the night.

When our brain wakes up in the middle of the REM cycle, before finishing the whole process, then this can cause this paralysis because the muscles still haven’t recovered from the rest period.

The most common causes of sleep paralysis – which, as we said, isn’t at all harmful to your body – can be many:

Read this article: Sleeping Well: 6 Habits to Get Enough Rest

If you’ve only suffered from sleep paralysis once, then you don’t have anything to worry about, because it doesn’t cause any health problems. Most of the time there isn’t any specific treatment, although here’s what you should do if it happens to you again:

If this happens to you frequently, then consult a doctor, as you could have an underlying sleeping disorder. However, it’s important to remember that it isn’t harmful to your health.

Try These 6 Tips for a Rejuvenating Sleep
This article explains the imprtance of a good night's sleep and then gives ideas on how to have a rejuvenating sleep through relaxation and other means. Read more »
Link copied!
Interesting Articles
Healthy mind
What Are the Symptoms of Agoraphobia?

Tension, the consequences of so many work occupations, added to the dizzying pace at which the world operates often leads…