Hepatitis in Children: What You Need to Know

Hepatitis in children may manifest itself with fever, belly pain, and weight loss. These are nonspecific symptoms, making the illness. difficult to detect in the early stages. 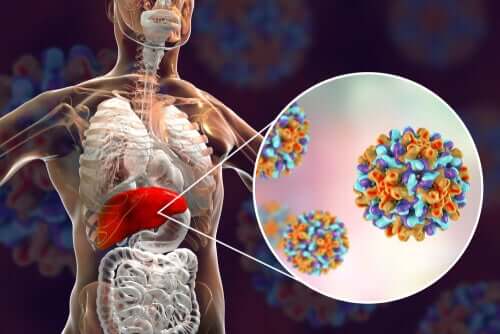 Hepatitis in children, as in adults, consists of an inflammation of the liver. The liver’s an organ that’s located on the right side of the abdomen and acts as a toxin purification system.

Also, it manufactures several substances essential for life, such as clotting factors, and is involved in the digestion process. The problem is that, when it becomes inflamed, the liver can’t function properly.

Although the incidence of hepatitis in children has decreased thanks to vaccines against certain viruses, it’s still a major health problem. It’s an infection that may go unnoticed, but at some point in life, leads to complications.

Most hepatitis is caused by viruses that have an affinity for the liver. In this article, we’ll explain what hepatitis in children is and what are its most frequent causes.

What causes hepatitis in children?

As we’ve already mentioned, hepatitis in children is caused almost exclusively by viruses. They’re grouped into a family called hepatitis viruses. The most important are hepatitis A, B, and C viruses, although there are also others, such as D and E, which are less common.

The most frequent cause of hepatitis in children is the hepatitis A virus (HAV). The illness it produces is usually benign and self-limiting. In Spain, for instance, it affects almost 5% of children. This virus spreads by the fecal-oral route. For example, when we don’t wash our hands properly after using the bathroom.

Most cases occur in places where there aren’t good hygienic conditions. This is because, when we consume water that’s not properly treated and purified, it may contain traces of feces that carry the virus.

Hepatitis in children due to HAV usually goes unnoticed, since the clinical manifestations aren’t very serious. However, this means that sometimes epidemic outbreaks occur or that there’s a high level of infection among family members.

The hepatitis B virus (HBV) is more serious. This isn’t because the infection initially produces more pronounced symptoms, but because it tends to become chronic. This virus spreads mainly because the mother, during pregnancy or birth, transmits it to the baby.

There are also many cases in which the virus spreads during adolescence. This may be in adolescents who are addicted to injecting drugs such as heroin. It can even be using tattooing or piercing without proper hygiene measures.

Nowadays, hepatitis in children isn’t usually due to hepatitis the C virus (HCV), as safety measures have greatly improved. This virus is also transmitted parenterally, and the vast majority of cases are from infected mothers. Just the same, even in this situation, it’s less likely to infect the infant.

However, HCV also tends to become chronic. In fact, almost 75% of cases of infection eventually progress to liver cirrhosis or liver cancer. It’s therefore essential to prevent and treat it.

You may be interested in: World Hepatitis Day: The Disease Is Preventable

What are the symptoms of hepatitis in children?

As we’ve already mentioned, hepatitis in children can go unnoticed. Its symptoms are quite nonspecific and, in some cases, mild. For example, it may manifest itself in the form of a feeling of tiredness and general malaise.

In some cases, children suffer from jaundice. This consists of the skin and eyes turning a yellowish color. There may also be:

Children must follow the vaccination schedule, which can protect them against certain types of hepatitis. Also, if there are any warning signs, it’s essential to go to the doctor and have them perform all the necessary tests to monitor the child or treat them in case of infection.

Symptoms of Appendicitis in Children
Appendicitis is a common disease that affects children and adolescents, and is one of the main causes of an emergency room visit. Read more »
Link copied!
Interesting Articles
Illnesses
Can Celiac Disease Cause Infertility?