Hepatitis D is a viral liver disease that requires previous hepatitis B infection to develop. There are few cases in the world so it's a rare pathology still under study. In this article, we'll you what researchers know so far. 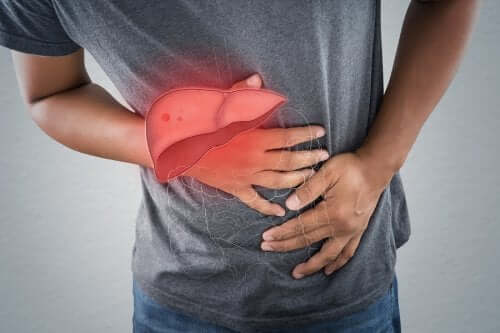 Hepatitis D is caused by a virus-like particle, but we can’t actually call it a virus because it doesn’t have all the usual structures of viruses. Therefore, it’s been classified as a subvirus or virusoid.

The agent that produces hepatitis D is called delta agent or deltavirus. Its discovery incorporated it into the family of viruses that cause hepatitis, along with hepatitis A, B, C, and E viruses.

Its microscopic structure is simple. It has only one circular ribonucleic acid (RNA) molecule that it uses to multiply. However, this RNA doesn’t encode other functions. Hence the category of subvirus it belongs in.

Since it doesn’t have structures for functions other than replication, it requires support from another virus. In the case of hepatitis D, the virus that serves as support is hepatitis B virus.

Once the delta agent enters the human body previously infected with hepatitis B, the deltavirus takes advantage of the structure of the B virus. Thus, the pre-existence of hepatitis B is a necessary condition for infection with hepatitis D.

Worldwide, an estimated fifteen million people suffer from it. Within the general planetary population this isn’t really a large number. These infected patients are also a small percentage of hepatitis B sufferers.

Geographically, there are regions with higher prevalence of hepatitis D than others. Central Africa, North Asia and the Middle East are the most affected. In Europe it’s located mainly in the eastern Mediterranean, and in America it’s in the Amazon.

The main mode of transmission of this disease is by blood. It’s common for those who have it to have contracted it through the exchange of syringes as a result of intravenous drug abuse. Less frequently, transmission can occur via tattooing with non-sterile objects.

On the other hand, blood transfusions can also be transmissible if performed without adequate measures. At present, blood banks without biosafety is practically unfeasible, but it’s still a possibility.

We know that hepatitis D can be transmitted sexually, although cases are very rare and in small proportion. Likewise, transmission from mother to child in the womb, called perinatal transmission, has a low incidence.

By knowing the routes of hepatitis D infection, we can establish when there’s a higher risk of infection. The population groups at increased risk are:

Forms the disease can present itself

Since hepatitis D makes its appearance in patients with previous hepatitis B, the doctors and the patient must understand the symptoms in that context. In other words, there are signs attributable to hepatitis B, and others specific to hepatitis D.

A clinical picture that scientists around the world have described is acute hepatitis due to coinfection. This is caused by an almost simultaneous infection of both viruses. The symptoms are those of usual hepatitis, with abdominal pain, liver enlargement, jaundice, nausea and vomiting. As well as being a mild case, it can also evolve into fulminant hepatitis.

Another variety of presentation is superinfection. In a person with long-standing hepatitis B, hepatitis D can accelerate the evolution of the first disease. The baseline hepatitis suffered by the patient progresses more rapidly and complications appear earlier than expected.

These complications could be the following:

Keep reading: Cancerous Cells: All You Need to Know

Diagnosing it isn’t that simple. First, doctors must diagnose hepatitis B which is the condition the delta agent needs to install itself. Subsequently, the presence of hepatitis D can be confirmed with a blood test.

Once the doctor confirms the diagnosis, treatment will depend on the medical condition of the patient. There’s an antiviral called pegylated interferon alpha which is indicated for eight months, but its effectiveness is low.

For cases of advanced cirrhosis and hepatic insufficiency, or liver cancers without metastasis, liver transplantation is an option.

5 Types of Hepatitis and Their Main Characteristics
There are five main types of hepatitis, and each of them has its own particular characteristics. Read on to learn more about them! Read more »
Link copied!
Interesting Articles
Illnesses
Causes, Symptoms, and Treatment for Gelastic Epilepsy