Heartburn During Pregnancy - Causes and Treatment

Heartburn, as its name suggests, is a problem that occurs in the stomach when digested food passes from the stomach to the esophagus when the valve that separates them relaxes. It often worsens during pregnancy. 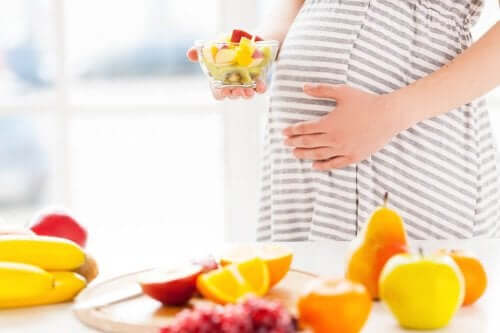 Heartburn is common during pregnancy. It has nothing to do with the heart or lungs, but people who experience it often report a burning sensation in their chest.

This symptom usually appears during the second and third trimester of pregnancy. While it’s not a sign of serious problems, it’s definitely uncomfortable and painful.

What’s the cause of heartburn during pregnancy?

Heartburn is a digestive problem that happens when digested food goes from the stomach, which contains gastric juice (an acid to aid in the digestion of food), into the esophagus (the tube between the mouth and stomach).

Under normal conditions, the food, once swallowed, passes through the esophagus and then into the stomach. There’s a circular valve at the bottom of the esophagus that shuts the connection between it and the stomach when we eat. The purpose of this valve is to prevent stomach acids from returning back into the esophagus.

When we swallow, the valve relaxes to allow food and liquid to flow. When a person experiences heartburn, the valve relaxes when they’re not eating so that stomach acids can go up the esophagus. Thus, this organ becomes irritated and it causes a burning sensation.

There are many factors that can make the valve relax more easily. All of them have to do with eating the following types of food:

Hormones are another cause of heartburn

When a woman is pregnant, her body secretes a series of hormones. These substances mediate various physiological processes in the body and relax the muscles of the digestive system. The esophagus valve is a part of it. Progesterone is the hormone that’s most involved in heartburn.

For this reason, stomach acids are more likely to move up into the esophagus and cause this problem. This situation aggravates when the pregnant woman is in a horizontal position. As we mentioned above, heartburn usually appears in the second or third trimester. This is when the uterus begins to press on the stomach.

Despite being a fairly common symptom and difficult to avoid, there are various measures that can help a pregnant woman decrease her discomfort and de-intensify her symptoms. Among these measures, you must try to:

Seven Traditional Heartburn Remedies
It's essential to know that there are many natural, traditional remedies for heartburn that can neutralize the stomach acid produced in the esophagus. Read more »
Link copied!
Interesting Articles
Pregnancy
How to Recognize Postpartum Depression and Treat it