Most heart murmurs in children are harmless and we shouldn't worry. However, sometimes tests are needed to rule out other heart conditions. 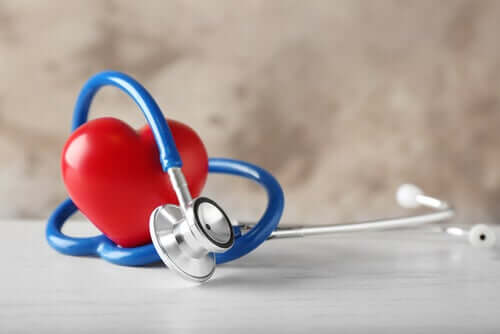 Heart murmurs in children can worry parents. However, they’re more common than most people think, and many kids have a heart murmur at some point. In fact, most of them don’t affect the child’s health at all and aren’t a cause for concern.

The human heartbeat is usually stable and sounds like “lub-dub, lub-dub.” However, in some people, the blood makes an extra sound as it passes through the heart. This is what’s known as a heart murmur.

What happens in heart murmurs?

Each heartbeat, as we’ve seen, consists of two different sounds, “lub” and “dub”:

A heart murmur is another sound you hear apart from the lub-dub. Sometimes, these sounds are just the result of normal blood flow through a normal heart. On the other hand, a murmur can be a sign of a heart problem.

In preschool and school-age children, heart murmurs are hardly ever a concern; kids don’t need special attention, and the sound eventually disappears. These children have heart murmurs known as functional or harmless murmurs.

If a child has a murmur, a doctor will discover it between the ages of one and five during a routine exam. Normally, the pediatrician can tell if a murmur is harmless just by listening to its sound. If necessary, he will need to see a pediatric cardiologist to be sure.

On rare occasions, a pediatrician will hear a heart murmur that sounds abnormal enough to indicate that something might be wrong with the heart.

Some heart murmurs in children may indicate that there’s a problem in this organ. In these cases, doctors will refer the child to a pediatric cardiologist. Then, this specialist will tell you if they need any tests, such as:

Notably, only 1 in 100 babies is born with a structural heart problem or a congenital heart defect. These little ones may have symptoms of the abnormality during the first days of life. Additionally, these symptoms may not show up until later in childhood.

Some of the symptoms that can appear in children are:

On the other hand, teens can develop other symptoms, such as:

There are several different heart abnormalities that cause heart murmurs. Some of these alterations are:

In summary, we could say that the presence of heart murmurs in children is not a serious problem. When parents find out, they shouldn’t get overly worried at first.

However, it’s a good idea to monitor its evaluation over time, especially if symptoms appear that that could be linked to this problem.

6 Types of Heart Disease and the Symptoms They Cause
In this article, we’ll explain six of the most common types of heart disease and their main symptoms. Read on to learn more! Read more »
Link copied!
Interesting Articles
Illnesses
Can Celiac Disease Cause Infertility?