Ever Heard of Pineberries or White Strawberries?

The cultivation of white strawberries is very difficult, so people who want to enjoy this unique fruit have to pay a high price for a small amount. 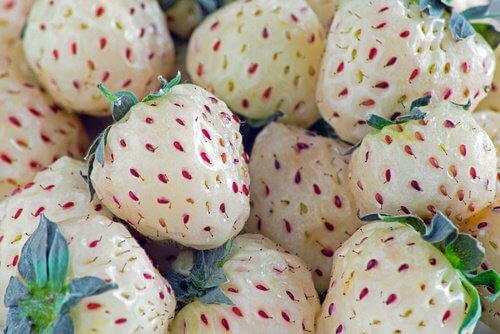 In 2003, this odd strawberry variety had nearly disappeared. However, timely action taken by these farmers managed to keep it growing. Today, white strawberries are no longer in danger of extinction.

In today’s markets, there are plenty of “rare” exotic fruits that are either difficult to cultivate or only produce fruit once or twice a year. This is what happens with the pineberry. Not only is it not even found in many parts of the world but it also exists in very limited quantities. As a result, most people don’t even know it exists.

These fruits are referred to as both pineberries and white strawberries. Their flavor is quite similar to that of pineapples but pineberries are actually a strawberry variety.

It is said to have originated in Chile but in the 1700s was exported to France. From Europe, it spread to many other parts of the world.

This little fruit is the result of a cross between two different species of strawberries (Fragaria virginiana and Fragaria chiloensis), both of American origin.

The hybrid, which was created by accident, was given the scientific name Fragaria x ananassa, which indicates that it is a hybrid and has a distinctive aroma and flavor similar to that of the pineapple (ananassa).

While white strawberries were once commonly sold at markets in Central and South America, where they were easy to grow, a growing lack of interest among farmers in other parts of the world led to a decline in their planting and cultivation.

Consequently, the species began to disappear nearly to the point of extinction. In 2003, however, a group of Dutch farmers decided to join together in an effort to save the threatened species and reintroduce it in France for commercial purposes.

Features of Pineberries or White Strawberries

Recovering the Species of White Strawberries

Until 2003, white strawberries were nearly extinct throughout the world. Additionally, very few people even knew they existed, thanks to lack of interest for so many decades.

Today, the production of this fruit is still very low. As a result, there are many parts of the world where people still don’t even know it exists. Given the aforementioned difficulties in production, those who can find it have to pay a very high price.

It’s anticipated that in the coming years, the species will be successfully introduced to new parts of the world. Thankfully, the pineberry will be more accessible to the average consumer.

The 9 Healthiest Tropical Fruits
Although tropical fruits were only available during some seasons, today you can enjoy them and benefit from them throughout the year. Read more »
Link copied!
Interesting Articles
Did you know?
New Year's Traditions Around the World