Halley's Comet Syndrome: Does The World End In December?

December is around the corner and with it, the annual balance of our goals and dreams. How have we done? What do our results mean? Psychologist Marcelo Ceberio invites us to reflect on this. 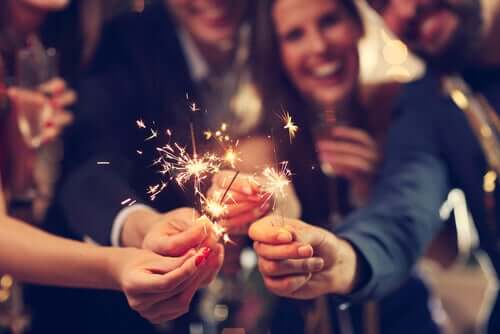 The month of December is key in many cultures. It finalizes all of the year’s activities and concentrates all of the built-up fatigue as a result of the unhealthy rhythm of life we all tend to live. But does the world end in December?

Due to this frenetic pace, our endocrine system is often responsible for expelling an extra dose of cortisol into our bloodstream in December.

What sensation does this cortisol release cause us? This stress can cause us to feel like the world is ending!

The arrival of December

December arrives. It’s that final stretch of the year and the prelude to festive holidays and summer holidays in different parts of the world. Often, it’s this time when we often sense the old wounds that were not attended to and symptoms of stress.

Alongside these behavioral signs, there is an urgent desire to strictly comply with projects that ended up being postponed or that we put aside to give priority to others. Needless to say, we often either procrastinate or just forget it…until December rolls around and we realize what we missed throughout the year.

Overwhelmed: Does the world end in December?

Stress marks this psychological panorama. On top of that, we often feel guilty and anguished about what we should and should not have done. December is therefore often full of stress and anxiety.

And so, ejected by the guilt-stress-anguish triad, we may generate a series of negative thoughts that reproduce like bacteria: “I should have done this,” “I could have started that,” “What will they think?”,“ I’m not good enough,”“I can’t”

What happens is that these thoughts can strongly affect our self-esteem. We progressively put ourselves down and, if we do not stop, we can reduce ourselves in our minds to being villains or ugly ducklings.

Throughout the year, and in December in particular, we tend to indulge in foods rich in saturated fat. The winter chocolates, the big dinners, the wines, the creamy desserts…all suddenly come to mind every time we see ourselves in the mirror.

Sometimes we wish the mirror was misty so we wouldn’t have to see ourselves and other times, the towel does its thing to hide the cellulite of the hips or prominent abdomens. Along the same lines, we often forget about seeing a doctor because we don’t have time.

Phew! What about psychotherapy?

Denial throughout the year worked well for us: We’ve covered our problems with activities, looked small distractions, found somemoments of gratification. We’ve rationalized or justified responses that we use over and over again to “solve” our issues. In the list of pending things, there are also the conversations we avoid so as not to hurt people’s feelings, or the failure to tell others how we really feel.

And so, we become people who just complain about negative things. For many people, December really is a month of stress when it feels like the world is ending!.

The paradox of hidden forces: does the world end in December?

Rising from the ashes or the deepest depths, there we are: trying to make up for the lost time.

For this reason, we often fill our agenda with unfinished activities. This how we enter the Decembrian world, believing that on December 31st everything ends; almost like the belief that Halley’s Comet would collide with the earth and explode it into millions of particles.

The evidence of this far-reaching imbedded psychological assumption is expressed through language in our prototypical headline phrase of the time like: “Let’s see if we meet before the end of the year!”

So we schedule appointments. We go to the doctor.  We see a psychologist and throw up a whole load of unworked demons. Meanwhile, gyms fill with new members. Everyone makes an effort to run, bike, or lift weights to get in shape in December.

You may also be interested in: Tips for Cleaner Lungs

Does the world end in December?

At the end of the day, everything is an illusion. The world goes on and on and dates and pressure are socially constructed frameworks superficially.

Calm down. In 1910, Halley’s Comet caused terror because it was thought that it would explode against the earth. None of that happened and its passage has been sighted every 70 years since 374 A.D.

December is not the end of the world, and it’s time we stop feeling like it is. The end of the year is a ritual for the end of one stage and the beginning of another. Often, we ruin rituals with anxiety, guilt, and anguish. How we live is the result of our actions, emotions, and reflections.

The pity is that sometimes we are too hard on ourselves and assume this is the way it has to be.

But it doesn’t have to be this way.

We challenge you to change the phrase and take responsibility for your life. Take the reins. Being happy should always be your goal. If December is a source of stress for you, change the game. Use it as a month for rest and reconnection, for quality time with those you care about.

December isn’t the end of the world. It’s just the beginning.

Link copied!
Interesting Articles
Fashion and style
What is Circular Fashion and Why Is It a Trend?

These office decoration tips will allow you to feel better in that area you spend many hours working in. No matter how big or small your office is, the most…

Home tips
5 Tips on How to Wash Your Bedspreads

Fashion and style
5 Tips to Help You Customize Your Clothes

If you want to stand out from the rest, you should personalize or customize your clothes. There are several ways…