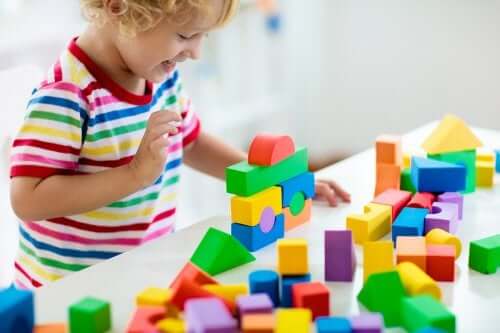 The brain begins to form during gestation. Once a baby is born, their brain continues to develop, especially during early childhood. Can you stimulate your child’s brain development? Can habits influence and enhance it?

In this article, we’ll tell you all about this.

The brain begins to form in the first two weeks of gestation. Later, towards the end of pregnancy, the cerebral cortex is formed. However, it isn’t fully developed, nor will it do so after delivery.

Indeed, at birth, the baby’s brain is still developing and maturing. In fact, the brain only reaches almost 80% of an adult brain until age three. Therefore, it’s a stage in which the brain is developing at an impressive speed, which is why people aren’t able to remember events before that age.

Thus, the first years of life are essential for brain development. In fact, many of its basic structures will develop, such as:

However, brain development doesn’t end at this age. On the contrary, it’ll continue to develop at a dizzying rate, maturing until adolescence.

Brain development is also an active and interactive process that occurs as the child grows and learns. Therefore, not only biological or physical factors affect brain development but also others such as the environment (parents, caregivers), lifestyle, etc.

When a child expresses themselves, be it through babbling or crying, and makes eye contact with you or receives a hug or an oral response, neural connections are established or reinforced in the brain. These connections later help them develop their communication and social skills.

This is what the Center on the Developing Child at Harvard University calls “serve and return”. In fact, the scientists at this center indicate that a relationship without interaction, that is, without a response, can hinder a child’s development.

For the brain to develop correctly, it needs interaction so that it receives appropriate stimulation. If this doesn’t occur, the stress responses will be activated. As a result, hormones that can lead to impaired brain development will be released.

We recommend reading: 12 Ways to Stimulate Your Child’s Brain Health

According to the Center on the Developing Child at Harvard University, it’s important to pay attention to how the child learns to cope with adversity during their development.

When we feel threatened, it’s normal for our body to respond with certain physical reactions, such as increased heart rate, and releasing hormones such as cortisol. In this sense, a child who’s immersed in a positive and supportive environment during these situations will learn to successfully regulate their stress levels, even at a physiological level.

On the other hand, children who don’t feel supported when faced with a threat will respond in an extreme and lasting way. According to the Center on the Developing Child at Harvard University, this can damage children’s brains.

This article may interest you: Why a Mother’s Voice “Awakens” Her Child’s Brain

Physical exercise is also a determining factor in brain development. Unsurprisingly, the brain is linked to general health. In this regard, some studies indicate that exercise during childhood can improve children’s cognitive functions.

In fact, according to a study, physical exercise also appears to be linked to a lower risk of childhood depression. Exercise is more than recommended for the prevention of mental conditions that could appear later.

Thus, for example, you mustn’t forget that some aerobic exercises, such as riding a bicycle, have a positive impact on hyperactive children or those who suffer from attention deficit.

The relationship between their child and their caregivers is crucial. Indeed, it’s of utmost importance for their physical, emotional, and intellectual development.

Children need to feel protected, safe, and cared for. They also need a stable reference of support, dedication, responsibility, and love. For this reason, children’s caregivers must always be receptive and ready to respond.

In fact, indifferent parents or caregivers may be the reason behind future mental illnesses. For example, learning, anxiety, and behavior disorders all may begin to develop at this age, among others.

As you’ve seen, the brain is constantly developing during childhood. Therefore, for healthy brain development, children need to interact with their environment. Also, their caregivers should be loving and supportive.

Antisocial Behavior and Brain Structure
The University College of London (UCL) carried out research on the human brain and antisocial behavior and The Lancet magazine published it. Read more »
Link copied!
Interesting Articles
Children
8 Crafts to Decorate a Children's Party