Grapeseed oil is extracted from the crushing of the seeds found within the fruit of the vine. We'll show you its composition, what it's for and who should avoid it. 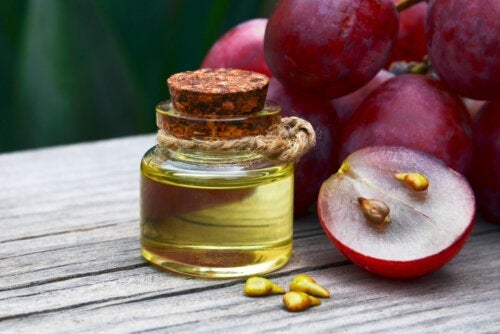 Thanks to its fruity aroma and flavor, grapeseed essential oil is widely used in the maceration of meats and the preparation of vinaigrettes  It’s also popular in cosmetics for its high levels of linoleic acid, an omega 6 fatty acid that can improve skin health.

Extracted from the seeds found in the fruit of the vine, this oil owes its popularity to the high concentrations of chemical compounds it contains. These include polyunsaturated fats and vitamin E. How do you process grapeseed oil? What is its composition? What uses does it have? Find out everything in detail.

How is grapeseed essential oil extracted?

Grapeseed essential oil is obtained from the seeds of these fruits, considered a by-product of winemaking. For thousands of years winemakers didn’t know what to do with them. However, technology allowed them to develop a process in which they extract oil from the seeds.

To do this, they crush the seeds and use solvents. However, there’s concern about the use of these substances, since some, in this case hexane, are related to harmful effects on health. However, solvents tend to disappear in the manufacturing process and there’s no scientific evidence that hexane residues in oil cause short or long-term damage. Of course, the environmental impact can be worrying.

In that sense, make sure that the grapeseed essential oil you buy indicates how it was processed. Otherwise, you must assume that it was through a chemical process.

The composition of grapeseed oil

According to research published in Nutrition and Metabolic Insights, grapeseed oil has phenolic compounds and unsaturated fatty acids. These give it anti-inflammatory and antimicrobial properties. In general, the fatty acids present in this oil are distributed as follows:

Most of these polyunsaturated fats consist of omega 6. According to studies, it’s related to an increase in inflammation of the body compared to omega 3. This is also reported in other research that links a high intake of omega 6 fatty acids with an increased risk of developing chronic diseases.

However, there’s scientific evidence that states that linoleic acid doesn’t alter blood levels of inflammatory markers. In this framework, it can’t be guaranteed that a diet high in omega 6 acids is the cause of pathologies. We still need more research to yield conclusive results.

On the other hand, grapeseed oil is also a source of vitamin E. A single 3.9-milligram tablespoon represents 19% of the recommended daily intake.

What other uses does it have?

Although we know that grapeseed oil can improve skin health by fighting acne, treating oily skin, and rejuvenating skin tissues, these aren’t its only uses. We can also use it in cooking and aromatherapy, so let’s see more details below:

Since it has a high smoke point, we can use grapeseed oil for frying and stir-frying. However, it’s not recommended as it’s a source of polyunsaturated fats. According to a study published in Vascular Pharmacology, these types of fats tend to react unfavorably to oxygen at high temperatures. They can easily produce harmful compounds and free radicals.

Therefore, you should try to avoid using this oil for frying and, instead, use it as a salad dressing, add it to when you’re preparing mayonnaise, or use it in baked goods or mincing meat.

Chronic stress can trigger a number of major skin problems, including acne, hair loss, dry skin, rashes, and even premature aging. Fortunately, experts assure us that aromatherapy calms anxiety. Similarly, it seems to be capable of serving as a carrier or base oil in this practice, as well as for sessions that include massages.

For those who aren’t allergic to this oil, the risks are few if you apply it to the skin. If you don’t know if you have an allergy or not, a simple test is enough. This consists of applying a little oil to a part of the body, such as the wrists or ankles, and waiting 24 hours. If, after this time, there’s no reaction (spots or rash), this means that the skin can tolerate it.

However, according to the National Center for Complementary and Comprehensive Health (NCCIH), grapeseed oil may not a good idea for certain people. In particular, those who suffer from blood diseases, those who’ll undergo surgery, and those who take anticoagulants such as warfarin.

Additionally, research published in the Journal of the American Oil Chemists’ Society found that some grapeseed oils can contain harmful levels of polycyclic aromatic hydrocarbons (PAHs). This is a group of more than 100 chemicals known to be carcinogenic in animals. For now, these effects haven’t been seen in humans.

Not everyone can use grapeseed oil

Grapeseed oil comes from the seeds found within these fruits of the vine. They’re a by-product of winemaking, and so to make the oil we need to crush them and use a solvent. Some people don’t agree with this process as they consider it to be unhealthy., However, there’s no conclusive evidence to show that solvents can cause damage to the body.

As for its benefits, we can note an improvement in skin health, either for combating acne, treating dry skin, reducing dark circles, and stimulating tissue rejuvenation. Its uses, beyond cosmetics, include the gastronomic field and aromatherapy.

Not everyone can use this oil. If you’re allergic, suffer from a blood disease, are about to have an operation or are taking anticoagulant medications, you should avoid their consumption and topical use.

Link copied!
Interesting Articles
Body care
8 Ways to Care for Your Mouth After a Tooth Extraction

Body care
Feminine Intimate Care: What You Need to Know

Feminine intimate care comprises a wide variety of products that go beyond substances intended for hygiene. Because of its morphology…

Papaya grows in tropical countries, specifically in the western hemisphere, where people have been using it for skincare purposes in…