Four Types of Substances to Avoid When Pregnant

Today's article will tell you what types of food to avoid when pregnant and the reasons why you must remove them from your diet during this stage in your life. 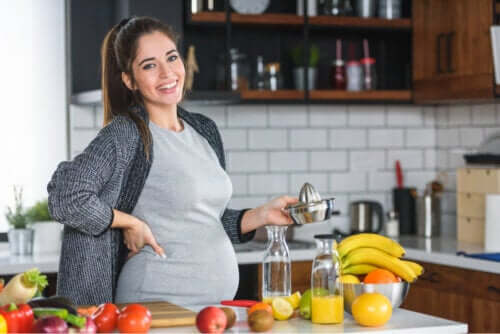 When you’re pregnant you must take into account that certain types of food can harm a fetus and thus you must avoid them for the sake of your baby’s health. This is because your nutritional requirements usually increase during this stage and thus, you must try to meet them.

The effects aren’t too strong during the first trimester since the energy demands of the embryo are limited. However, as the months go by, you’ll have to provide a greater number of calories to meet their nutritional needs as well as yours. Today’s article will tell you what these products are and the reasons why you should remove them from your usual diet while you’re pregnant.

Four types of food to avoid when pregnant

Stay away from alcohol when you’re pregnant. This is because the consumption of this substance, in any of its forms, slows down the development of the baby and can cause malformations.

An investigation carried out with 291 pregnant women concluded that moderate alcohol consumption during pregnancy influenced the development and future behavior of the child. That is, there weren’t only severe physical changes but also future behavioral disorders.

For this reason, restrict this substance in your diet even before planning a pregnancy. Note the fact that alcohol impairs fertility and decreases your chances of conceiving.

Caffeine is another substance to avoid during pregnancy. This is because its effects on a fetus are still unknown.

However, research published in the International Journal of Gynaecology and Obstetrics journal states that caffeine could induce a miscarriage. As you can see, it’s probably best to avoid it entirely during this stage. We know, some people just can’t stand life without a morning cup of coffee; opt for decaf if you’re in this group.

To find out more about How to Take Folic Acid During Pregnancy: 3 Tips

The consumption of raw fish has become popular in recent years due to eastern traditions and their culinary delights. As a general rule, this type of food doesn’t pose a health hazard.

However, it’s different when it comes to pregnant women as they must avoid the consumption of raw fish. This is only because it’s more likely to contain bacteria or other microorganisms capable of putting the health of a mother and her fetus at risk.

The anisakid, an amoeba capable of generating an anaphylactic reaction is an example of these microorganisms. It’s a health hazard for anyone but much more for a pregnant woman and her baby.

Pregnant women must be particularly worried about the intake of heavy metals. This is because these elements could reach the baby through the placenta and alter fetal development.

According to research published in the Environment International journal, a baby’s exposure to mercury during pregnancy is related to a delay in language learning. Hence, pregnant women should avoid consuming large fish as they’re more likely to contain large amounts of mercury in their adipose tissue.

However, the intake of fish is beneficial during all stages of life. It’s for this reason that women should definitely incorporate smaller fish types into their diet. The omega 3 fatty acids in their composition are linked to better fetal development and a reduction in cardiovascular risk in the mother.

As you can see, the purpose of these diet restrictions during pregnancy is to safeguard the health of a mother and her fetus. Nutrition is essential throughout life, but it could significantly affect the health of a child at this particular time, both in the womb and in their adulthood.

It’s for this reason that we recommend you follow the advice we shared with you above. Also, consult a doctor or a nutritionist if you have any questions. They should be able to help you plan a balanced diet that meets your needs, reduce risks, and ensure the proper development of your baby.

Remember, it’s important to avoid smoking and drinking alcohol. These actions can greatly impair the chances of a fetus. Also, if you like fish then stick to the smaller types as the concentration of heavy metals in them is considerably lower.

The Importance of Diet in Pregnancy
Eating a healthy diet in pregnancy meets the nutritional needs of both mother and fetus. In this article, discover more about this topic! Read more »
Link copied!
Interesting Articles
Pregnancy
Do Home Pregnancy Tests Work?