In addition to treatments, prevention is essential for eliminating foot fungus: wear cotton socks and expose your feet to the sun. 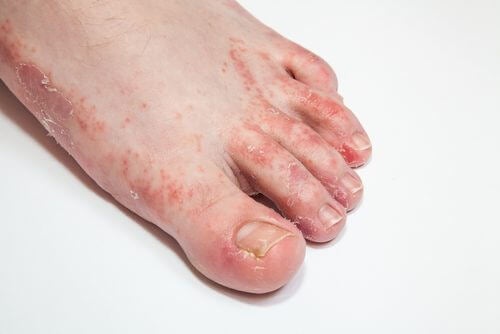 It’s quite common to realize that it’s time for some foot fungus remedies.

One day, you realize that your feet are stinging like never before. In fact, you’ve been experiencing strange discomfort in the area for a while, but you have not given foot fungus much thought. It bothers you so much to the point that you are looking forward to coming home so you can go barefoot.

You finally do it, and what do you find?

The skin has lost its smoothness. Now, it’s rougher than normal, and one of the nails is a strange color.

Believe it or not, this scene is more normal than you’d think and, of course, you’ll recognize that you have foot fungus, otherwise known as “athlete’s foot”.

Although it’s a very common condition, many of those who suffer from it feel a certain shame, since popular culture attributes it to a lack of personal hygiene. However, this is not necessarily the case.

Foot fungus is an infection that’s caused by excess moisture. Therefore, it is not about lack of cleanliness, but rather about perspiration.

This is where you should look for the origin of foot fungus. Knowing this, the foot fungus remedies you use to eliminate it must address this process and act as antiseptics.

So you stop the cause and the effect.

Read: 7 Things you Need to Know About Toenail Fungus

Apple cider vinegar is a very powerful natural antibiotic. When it comes to an infection, it’s always a good option to turn to.

However, the remedy we propose includes ingredients that are ideal supplements for any antibiotic.Ingredients

We recommend you read: The 7 Best Home Uses for Apple Cider Vinegar

When there is foot fungus, it does not always accumulate on the skin. In fact, it’s very common for it to be concentrated on the nails. You will notice your nails may even have a purple color. Sometimes, you will even see the nails fall apart little by little.

If you have noticed these symptoms, tea tree oil is the best option.

Its greatest virtue is that it works directly against the cause of the infection, so it not only serves to alleviate its symptoms, but to end the cause.

Many people who suffer from this problem complain that once it has appeared, fungus re-emerges every so often.

However, tea tree oil is one of the most effective foot fungus remedies in preventing future episodes, precisely because of its ability to attack the source.

You can buy it in a herbal store, and it is even available in some large stores.

See also: 5 Signs Your Fingernails Use to Show You Something’s Wrong with Your Health

Lavender oil is a very effective anti-fungal but, in addition to its healing properties, it also provides a protective layer.

Thus, despite your tendency to suffer from this type of problem, you will have an ally against it.

As with tea tree oil, you can buy it in large stores and in shops selling natural products.

Ultimately, we would like to remind you that prevention is essential in this area. As we said, try to avoid moisture and try to allow the foot to breathe as much as possible.

To do this, always wear cotton socks and expose your feet to the sun, when you have the opportunity.

These two simple actions can greatly impede the survival of microorganisms.

Carrots are rich in beta-carotene, and you should try and eat them as much as possible. However, not many people…

Taking care of your body
Keratosis Pilaris and Natural Remedies

Different causes can lead to thick yellow nails. In any case, the aesthetic effect can be quite annoying. And it…

Chances are, you've heard countless times that getting regular physical exercise is "good for your health." However, did you know…

To treat bacterial vaginosis, your doctor may prescribe some antibiotics, either in pill or cream form. However, there are other…

Unlike conventional deodorants, chemical-free natural deodorants are those that don't contain any chemical substances. In addition, they're made with 100%…