Although specialists say fluoxetine treatment can be used during pregnancy, it should only be used in clinical situations that justify the potential risk to the fetus. 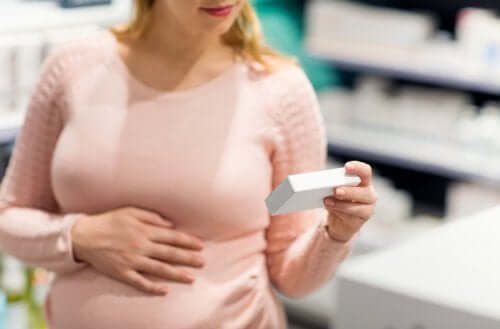 Fluoxetine is one of the best-studied drugs to use during pregnancy. Physicians prescribe it to treat depression and it belongs to the group of serotonin reuptake inhibitors (SSRIs), as it has the ability to increase the levels of this neurotransmitter. Increasing these levels is key in maintaining the balance of our mood.

Fluoxetine, under the brand name Prozac, was the first drug marketed in the United States by the company Eli Lilly in 1988 for the treatment of major depression. It inspired a lot of confidence in the medical community, since it had the same effectiveness as existing antidepressant drugs and also had fewer adverse effects.

Today, specialists have developed new molecules to treat depressive disorders, although fluoxetine continues to be most used worldwide. Below, we’ll tell you more about taking it during pregnancy.

Pregnancy is a stage that marks a woman’s life. The hormonal sway that takes place in the body can trigger various types of emotions and feelings, sometimes even conflicting emotions.

When this sadness persists over time, a picture of prenatal depression may appear. This is a complex state we must be very careful with.

This is a complicated problem to detect, since normal signs of pregnancy itself can be confused with its symptoms such as tiredness, listlessness or difficulty sleeping. If the following symptoms appear, we should ask for professional help:

The mother-to-be may also show ambiguous feelings towards the baby and even reject the idea of having to face the birth.

Untreated prenatal depression can lead to significant side effects for both mother and baby. It also increases the risk of miscarriage, premature delivery, low birth weight or delayed growth of the baby.

In addition, suffering from prenatal depression increases the chance of suffering from depression after delivery by 25 percent; however, you must consider the benefits and risks of taking antidepressants during pregnancy. Here’s what you need to know.

You may like: Risks of a High Sugar Diet During Pregnancy

Can I take fluoxetine during my pregnancy?

Fluoxetine is the generally prescribed drug to treat prenatal depression and although the FDA classifies it as a category C, it’s considered a safe therapy for pregnant women suffering from depression. However, specialists must always evaluate the risks and benefits of the treatment.

According to the scientific literature, treatment with fluoxetine during the first trimester of pregnancy may be associated with an increased risk of cardiovascular malformations in the baby.

Data suggests that the risk of the infant suffering a cardiovascular defect following maternal exposure to fluoxetine is in the order of 2/100 compared to an expected rate for these defects in the general population of approximately 1/100.

Other epidemiological studies suggest that the use of SSRIs in late pregnancy may increase the risk of persistent pulmonary hypertension (PPH) in the neonate.

The observed risk was approximately 5 cases per 1,000 pregnancies. In the general population, 1 or 2 cases of PPHN occur per 1,000 births.

According to the AEMPS, pregnant women shouldn’t take fluoxetine unless the woman’s medical situation requires this treatment and the potential risk to the fetus is justified.

It’s especially important that discontinuation of fluoxetine treatment shouldn’t be abrupt, but rather that the dose be gradually reduced over a period of one to two weeks to avoid the appearance of withdrawal symptoms.

In addition, if a mother-to-be takes fluoxetine, they should be careful at the last stage, or just before birth. This is because newborn babies have shown certain symptoms, such as:

A medical psychiatrist should evaluate fluoxetine treatment during pregnancy, both in the first and last stages. The professional should evaluate the risks and benefits for both the mother-to-be and the baby.

Therefore, if a pregnant woman faces a significant depression, we can consider maintaining the treatment. However, if the depression is well-controlled, the best thing to do is dispense with fluoxetine treatment and receive psychological support.

Existential Depression: When Life Loses its Meaning
People with high intellectual capacities can suffer from a particular type of depression. Here, learn about existential depression. Read more »
Link copied!
Interesting Articles
Illnesses
Cancer During Pregnancy: What You Need to Know