The treatment of gastritis may vary depending on its severity. However, you should consider some herbal remedies that may help treat gastritis and reduce your symptoms. 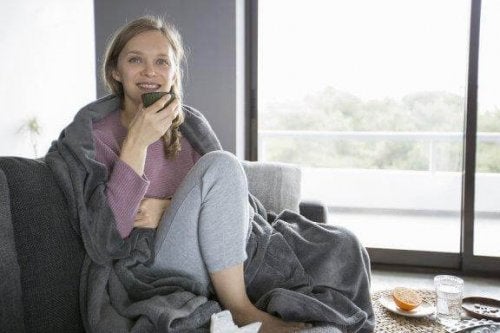 The treatment of gastritis may include medications such as antibiotics, proton-pump inhibitors, or antacids. The treatment also involves diet and lifestyle changes. However, did you know that these five medicinal teas may help treat gastritis?

Thanks to the properties of some herbs and spices, teas are good remedies to minimize many of the symptoms of gastritis. In fact, they’re the best choices in mild cases of this disease because they have fewer side effects due to the fact that they’re natural.

Gastritis is a disease characterized by the inflammation or swelling of the stomach lining. It may be acute or chronic, depending on its cause or how long the symptoms last. It’s often caused by the H. pylori bacterium.

However, it could also be related to excessive alcohol consumption, prolonged use of nonsteroidal anti-inflammatory drugs (NSAIDs), stress, or tobacco use, among others.

Some of the symptoms of this condition are indigestion, nausea, vomiting, and feeling of fullness. In more severe cases, such as erosive gastritis, you may also experience symptoms such as black or tarry stools, vomiting blood, swelling, and severe abdominal discomfort.

The clinical manifestations of gastritis should be evaluated by a professional. This is because they’re often similar to those of other digestive disorders. Your doctor must confirm the diagnosis with a physical examination and blood, stool, or breath tests. They may also suggest an endoscopy or biopsy.

If the condition is severe, it’s imperative to follow the medical treatment prescribed by your doctor to see an improvement. If your condition is mild, then habit changes and some natural supplements may help. Discover some medicinal teas that may prove to be helpful below.

Green tea with manuka honey is one of the best treatments for gastritis. A study determined that its consumption may minimize the risk of infection by H. pylori bacteria.

Gingerol and the other active compounds of ginger have positive effects on the control of acute and chronic gastritis. These substances help to minimize stomach lining inflammation and inhibit the growth of some strains of the H. pylori bacterium.

Chamomile can relieve some of the symptoms associated with gastritis, such as upset stomach and slow digestion.

It isn’t the most powerful treatment for gastritis. However, it’s a good complement to relieve associated symptoms such as indigestion, inflammation, and heartburn. This medicinal plant is safe, even for children.

This may interest you: Find Relief from Your Gastritis Symptoms with These 7 Fruits

This is one of the most popular remedies to treat gastritis and digestive system discomfort.

Ginseng is a great natural remedy for gastric ailments.

American ginseng is used to treat gastritis and its symptoms. It’s not as popular as other natural remedies. However, it’s used to improve digestion, reduce vomiting, and relieve inflamed colon. In addition, it minimizes inflammation of the stomach lining.

Caution: Avoid this drink if you’re taking medication for depression or diabetes. You should also take it with caution if you suffer from hypertension and/or nervous system disorders.

Consuming these medicinal teas can help treat gastritis, minimizing its main symptoms. However, they shouldn’t replace the medication prescribed by your doctor. In addition, it’s important to consult about their possible side effects.