Five Habits to Relieve the Symptoms of Fibromyalgia

Practicing healthy habits can help relieve the symptoms of fibromyalgia and prevent complications. In this article, we’ll share the most relevant ones. 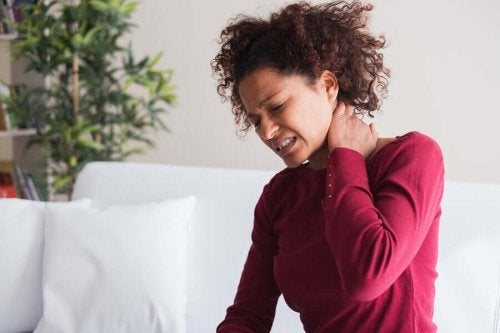 Fibromyalgia is a chronic disorder characterized by widespread muscle and bone pain. It also causes prolonged episodes of fatigue, tender points, and sleep disorders, among other symptoms. Are you looking for strategies to relieve the symptoms of fibromyalgia?

Although the current medical treatment for this condition includes the use of certain drugs and complementary therapies, certain habits contribute to a greater sense of relief. In fact, doctors advise many of them, as they play an important role in coping with the pain.

Fibromyalgia is a disease whose main symptom is prolonged musculoskeletal pain. Patients who suffer from it tend to feel fatigued and are unable to perform many daily tasks.

However, experts consider the symptoms subjective due to how hard they are to measure with tests. In fact, many professionals questioned the existence of the disorder due to the lack of objective tests on its development. Fortunately, studies that were conducted in recent years have facilitated the understanding of the disease and its diagnosis. In fact, they’ve allowed experts to establish its relationship with other disorders, such as depression and insomnia.

You should also read: 7 Herbal Treatments for Fibromyalgia Relief

The symptoms of fibromyalgia

Formerly, to diagnose someone with fibromyalgia, doctors considered sensitive areas known as “tender points”. When they’re pressed, they can cause pain. However, currently, they aren’t as relevant for the diagnosis. Nowadays, doctors take existing symptoms and their durability into account. Thus, if a patient’s pain lasted at least three months, doctors begin to consider fibromyalgia. However, they still run other medical tests to determine its cause.

The clinical manifestations of this condition can vary from patient to patient according to their age, current state of health, and habits. In general, the symptoms may include:

Habits to relieve the symptoms of fibromyalgia

Many treatments and therapies help relieve the symptoms of fibromyalgia. Although doctors usually prescribe complementary drugs, lifestyle changes are determining factors in reducing the frequency and severity of the ailments.

It’s harder for the patients afflicted with this disease to get restful sleep. As a result, a “vicious cycle” that significantly affects the severity of the pain occurs. Poor sleep increases fatigue and pain. And, in turn, pain affects sleep.

It’s essential to take steps to promote healthy sleep every night. First, it’s advisable to remove all distractions from your room, including televisions and electronic devices. Also, it’s favorable to resort to relaxing therapies, such as:

2. Stress management to relieve the symptoms of fibromyalgia

Knowing how to manage stress is one of the keys to relieving the symptoms of fibromyalgia.  This emotional state can worsen pain and related discomforts. Therefore, it’s essential to eliminate sources of stress, whether emotional, mental, or work-related.

Also, it’s a good idea to take a few minutes to:

The pain seems to hinder patients’ ability to exercise. However, contrary to what some think, this activity has positive effects on fibromyalgia management. Exercise helps to maintain stronger muscles and joints. Also, it reduces mobility problems.

However, due to the characteristics of this condition, it should be moderate and adapted. Some suggestions are:

Discover: Is There a Connection between Gluten and Fibromyalgia?

A good diet is one of the best allies to minimize the symptoms of fibromyalgia. Many fibromyalgia patients also suffer from gastrointestinal problems, such as irritable bowel syndrome (IBS). Thus, you should plan your diet with the help of a doctor or nutritionist.

In general, experts recommend patients to minimize the consumption of caffeine, processed and fried foods, and foods rich in sodium and sugars. Instead, you should consume meals that contain:

5. Acupuncture sessions to relieve the symptoms of fibromyalgia

One of the alternative therapies to relieve the symptoms of fibromyalgia is acupuncture. This Eastern technique involves pricking the skin with needles to encourage blood flow changes to promote healing and relieve pain.

According to a study published in the Journal of Rehabilitative Medicine, fibromyalgia patients who tried acupuncture benefited from pain relief for at least two years compared to those who didn’t. Another similar alternative is acupressure.

Caution: Acupuncture can cause pain, minor bleeding and bruising after each session. Thus, it’s essential to resort to an expert, since malpractice can be dangerous.

Finally, experts recommend that fibromyalgia patients keep a record of their symptoms and evolution. This allows both the patient and doctor to understand what factors can worsen the pain. Also, it’s crucial to consult a doctor immediately in case of complications.

What You Need to Know About Fibromyalgia
Learn more about Fibromyalgia, also called the "invisible illness". It's more common than we think, but many people might don't even notice they have it. Read more »
Link copied!
Interesting Articles
Healthy habits
Ways to Prevent Falls in the Elderly