After his operation Gabriel was left with a cancer surgery scar on his head that took away all his joy and desire to leave the house. 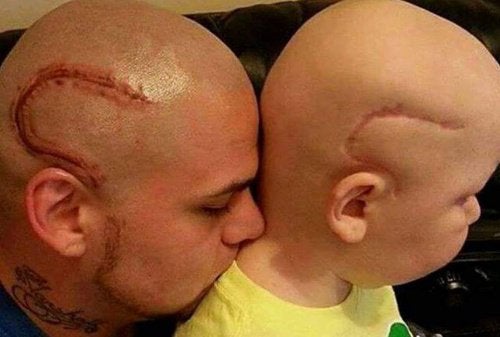 Gabriel Marshall is an eight-year-old boy who knows two things very clearly: he has the best father in the world and a long life ahead of him. Find out why his Dad got a tattoo of his cancer surgery scar in this article.

He’s a brave boy, very beloved to those around him, and yet his brain cancer has left a deep scar on his head that took away some of his spirit and his confidence.

If Gabriel is a news item these days around the world, it’s because of a beautiful and encouraging reason. Not long ago, many countries celebrated Father’s Day, and his father, Josh Marshall, wanted to do something special.

Gabriel bears a striking cancer surgery scar on his head that he’s ashamed of. It reminds him of his illness, which is now nearly gone.

Because that scar was robbing him of his smile, his father decided to get a tattoo. In the same place, the same color, to simulate the same wound for a very specific purpose: to give his son strength.

An example of a father who loves his son

All parents love their children above anything else. There’s perhaps no scarier  moment than finding out your child has been diagnosed with a serious illness such as cancer.

We recommend you read: Simplicity is the key to education children

Statistics say the survival rate for children with cancer between the ages of four and 18 is 80%.

This is good news, but nevertheless the struggle, fear, and pain of seeing your young one subjected to harsh treatments and interventions is undoubtedly very difficult.

Gabriel Marshall received his diagnosis last year and the impact was overwhelming: he had a rare form of brain cancer known as anaplastic astrocytoma.

It’s a malignant tumor of the central nervous system that usually appears in adult males.

Although the prognosis is not great, survival in children is greater, which gave Gabriel’s family hope that they never lost for even one day.

Cancer in an 8 year old child

When a child is diagnosed with a disease of this magnitude, they are not yet fully aware of what it means.

Their life will drastically change, and everyday activities like school, friends, games, and homework will be disrupted by hospital stays, treatments, needles, and fear.

One of the toughest things they have to accept is their physical change.

Chemotherapy treatments not only cause patients to lose their hair. Their face swells, they lose weight, their expression changes, and fatigue is the constant companion of every cancer patient.

We recommend you read: The 4 most powerful anti-cancer seeds

Josh Marshall is Gabriel’s father. He’s a 28 year-old optimist and a brave man who hasn’t left his child’s side even for a moment. In spite of how unfair life can be, he knows that the most important thing you have to maintain is your attitude and your sense of hope.

All of us here at Step to Health wish little Gabriel all the luck in the world in his recovery.

Tips to Face the News about Cancer
Receiving the news about cancer makes a huge psychoemotional impact on the person. Without a doubt, there is a before and after. Read more »
Link copied!
Interesting Articles
Illnesses
Characteristics of Henoch-Schönlein Purpura Disorder