Everything You Need To Know About Yarrow Tea

Yarrow tea is known for its uses in natural medicine. Although it doesn't cure diseases, it can serve as a complement to improve health and well-being. Read this article to find out what it's used for! 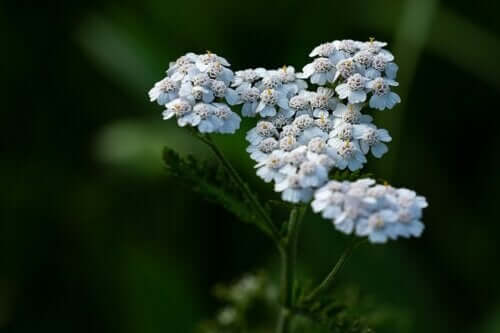 Yarrow tea is a natural product obtained from the plant known under the scientific name Achillea millefolium which, in turn, belongs to the Asteraceae family. According to historical data, the name of its genus (Achillea) refers to the warrior Achilles of Greek mythology, who used the plant to treat the wounds of his soldiers.

According to a review published in the DARU Journal of Pharmaceutical Sciences, yarrow is notable for its significant concentration of phytochemicals, including flavonoids, terpenoids, and lignans.

What can you use it for? Keep reading to find out!

In natural medicine, people use yarrow tea orally to calm various digestive symptoms. Similarly, many believe that it can help in the treatment of wounds. However, to date, there’s no solid evidence to verify these properties. Therefore, as with other herbal remedies, you should use it with caution.

Although some studies indicate that this plant can provide certain benefits as an herbal tea, extract, or essential oil, the evidence isn’t conclusive and you shouldn’t consider it a substitute for medical treatments.

With this clear, let’s take a look at some of its uses.

In traditional medicine, people have used yarrow tea as support for digestion. In particular, it’s believed to help reduce diarrhea, gas and bloating. It’s even recommended as a complement in the case of ulcers and irritable bowel syndrome (IBS).

This is because its flavonoid and alkaloid content seems to contribute to the relief of these digestive problems, as indicated by research published in the African Journal of Traditional, Complementary, and Alternative Medicines.

On the other hand, the extracts of the plant have antacid and anti-inflammatory properties which have can protect against the damage caused by excess stomach acid. In an animal study published in the Journal of Ethnopharmacology, yarrow demonstrated anti-ulcer properties.

However, we still need more evidence to make conclusive statements.

Without a doubt, one of the most traditional uses of yarrow tea is wound healing. In fact, people use yarrow extract to make poultices and ointments for this purpose.

An animal study published in Acta Poloniae Pharmaceutica determined that yarrow leaves have extracts with anti-inflammatory and antioxidant activity. These effects seem to have a positive impact on injury recovery.

On the other hand, this research established that the extracts of this plant contribute to increasing fibroblasts. Fibroblasts are the cells responsible for regenerating connective tissue. Thus, it could be a useful supplement in the case of scars.

Yarrow tea supports good brain function. Although there’s little preliminary evidence in this regard, the findings seem promising regarding the use of the plant for cognitive problems.

A review published in the Iranian Journal of Basic Medical Sciences suggests that yarrow flavonoids serve as adjuvants to neurodegenerative disorders. Specifically, its antioxidant and anti-inflammatory action is positive in diseases such as:

Yarrow tea is safe for most healthy adults, as long as you consume it in moderation. However, some people should be cautious because of the possible risk of side effects. For example, pregnant women should avoid it, as it can cause miscarriages.

For safety, it’s also important to avoid using it during lactation, as it can affect the menstrual cycle. Likewise, people with bleeding disorders or who take anticoagulant medications should avoid it, since it increases the risk of bleeding.

Along the same lines, you shouldn’t take it before or after surgery, due to the risk of bleeding. People who have allergic reactions to ragweed and similar plants shouldn’t take it, either.

There’s no evidence on what is the safe dose of yarrow tea. It may vary depending on the age, health status, and possible conditions of each individual. You should consult your doctor before taking this or any other natural supplements.