Everything You Need to Know about Visual Impairment

Visual impairment greatly limits those who suffer from it. Although it’s a very common problem around the world, nowadays, there are many technological aids. 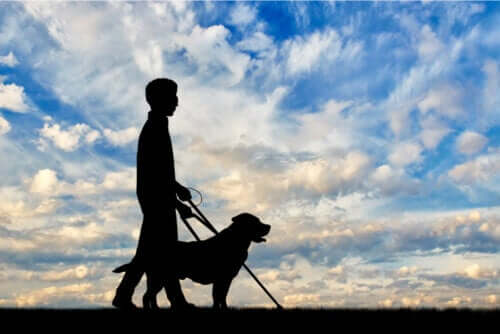 According to data from the World Health Organization (WHO), blindness and visual impairment affect at least 2.2 billion people around the world. Of those, 1 billion have a preventable vision impairment or one that has yet to be addressed.

The organization also points out that this condition more commonly affects people in low- and middle-income countries, women, older adults, and ethnic minorities. This corroborates the link between this problem and the difficulty or impossibility of accessing an adequate approach in time.

There’s no absolute consensus on the concept of visual impairment. This is because there are differences regarding the limit that separates the impairment from the disability as such. Nevertheless, one of the most popular definitions is the one we’ll share with you below.

We must note that the term “visual impairment” should be used generically for both people who are totally blind and those who have significant impairment. Thus, it’s a concept that covers any type of serious visual problem, regardless of what causes it.

In this regard, the concept is complemented by noting that said problem must generate limitations to perform certain activities, such as reading, writing and orientation, and mobility. In turn, blindness is any form of serious visual impairment, without implying a total absence of vision.

What are its causes?

The main causes of visual impairment and blindness are cataracts, ametropia, trachoma, onchocerciasis or river blindness, glaucoma, diabetic retinopathy, and age-related macular degeneration. Below, we explain them in detail:

Vision problems are detected in a checkup with an optometrist or ophthalmologist. Likewise, you should go see a professional if you have difficulty reading, seeing up close or far away, or seeing images clearly or if you have conjunctivitis or eye discharge.

There are four degrees of visual impairment, based on the acuity of the person’s eyeballs:

On the other hand, from a functional and often legal standpoint, the classification is as follows:

This article may also interest you: 4 Natural Remedies to Compliment Your Glaucoma Treatment

The needs of a person with visual impairment

Fortunately, a person with visual impairment can use different aids to better cope with their condition. For orientation and mobility outside their house, they can resort to white canes, guide dogs, and, currently, technological tools such as GPS with apps for those who have vision problems.

To visualize objects and, depending on the degree of visual impairment, it’s a good idea for these patients to help themselves with greater lighting or with devices that have enlarged fonts, magnifying glasses, and high-power glasses. If a person is blind, Braille is a very effective method of reading.

For obvious reasons, the person must adapt their home to their visual conditions. Likewise, today, there are increasingly effective aids, such as augmented reality viewers and smart glasses for the blind.

Loss of Vision: Causes and Symptoms
Sudden vision loss is a major problem that shouldn't be ignored under any circumstances. Keep reading to learn more about it. Read more »
Link copied!
Interesting Articles
Illnesses
Eczema and Stress: How Are They Related?