Everything You Need to Know About the Polio Vaccine

There are two versions of the polio vaccine, and both have contributed to the near eradication of the disease in the world. We're going to share with you everything you need to know about polio immunization. 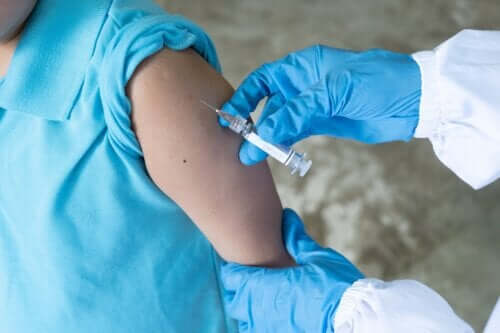 Today, the polio vaccine is a clear example of how sustained immunization plans yield results over time. Thanks to this medicine, a disease as serious as polio has almost disappeared in the world.

This simple, inexpensive, and widespread method with proven effectiveness has allowed us to reduce the transmission of the virus in the general population, both in children and adults.

What does it consist of? How do doctors administer it?

Here are the details.

Poliomyelitis is a disease caused by the poliovirus, of which there are three known types. One type has already disappeared and there are no new records of outbreaks. The other two are still active, but with a low incidence rate as a result of global vaccinations.

A person contracts polio when he or she comes into contact with another infected person, or when the virus uses food to move and infect. This occurs through the contamination of drinks and food by fecal matter.

Most of those infected are asymptomatic; that means that they don’t show any signs of the illness. However, the small group with visible symptoms has the possibility of evolving towards serious complications, such as paralysis.

Paralysis: The most severe form

The paralytic form is the most severe form of polio. People suffer muscle weakness that extends to all areas of the body, including the chest area. In fact, it compromises the respiratory dynamics, leading to death by asphyxiation.

There’s no cure for polio. Therefore, vaccination has come to represent a possible approach to prevent the uncontrolled spread of the virus.

Science has succeeded in developing two polio vaccines. They are known by the name of their creators and are called Sabin and Salk. The first is administered orally and the second is administered intramuscularly.

The Sabin vaccine is a live attenuated virus immunization. To achieve this, laboratories cause genetic mutations in the viral particles to make them less virulent. In this way, once they are inoculated, they can generate symptoms, but very mild ones. This doesn’t alter the immunity that the vaccine produces.

A characteristic of the Sabin vaccine is its power of replication in the digestive system. This causes the “herd immunity effect“, since those who were inoculated then expel attenuated particles with their feces that help in the immunization of the co-habitants of the same household.

The Salk version, as we’ve already mentioned, is intramuscular. Like other vaccines, it punctures and penetrates the muscle and leaves the vaccine there. In this case, the viruses aren’t attenuated; they’re inactive.

The procedure is different and the result varies a little when compared to Sabin. The entire intestinal process isn’t carried out, and so this immunization is effective in preventing serious forms of the virus. However, it has no herd immunity effect and doesn’t prevent individuals from carrying the virus in their digestive system.

Who should get the polio vaccine?

The indications for vaccination against polio vary from country to country. States develop protocols for administering immunizations according to local epidemiology and current legislation.

However, in general, most of them agree on the following:

Possible side effects of the polio vaccine

In general terms, the polio vaccine has few side effects in any of its versions. Most of those that do occur are in the area of the injection and have to do with redness and inflammation.

With the Sabin version of immunization, there may be mild gastrointestinal symptoms consisting of diarrhea, some nausea, and even a fever of less than 37.5°C. This is self-limiting and never lasts more than 48 hours.

Some reports have shown evidence of more severe reactions, among which an allergic reaction is the most worrisome. Fortunately, there aren’t too many cases and the estimation is that there is 1 adverse reaction of this type for every million inhabitants.

The polio vaccine is a very effective method of preventing this disease. There aren’t too many illnesses in the world that can be so easily avoided if the immunization schedule is complied with.

For this reason, it’s essential that countries and individuals increase their efforts in carrying out this vaccination program. We’re very close to completely eradicating polio from the planet and it would be a waste of decades of work if we don’t finish off the job.

If you have young children, ask your local health center how to go about getting them vaccinated. If you’re an adult, check your vaccination calendar to make sure you’re up to date. Hospital immunization wards have the right information to help you.