Everything You Need to Know About Pulmonary Thromboembolism

Pulmonary thromboembolism is a serious disease that can lead to the death of the patient. Therefore, it's important to lead a healthy life and avoid smoking. 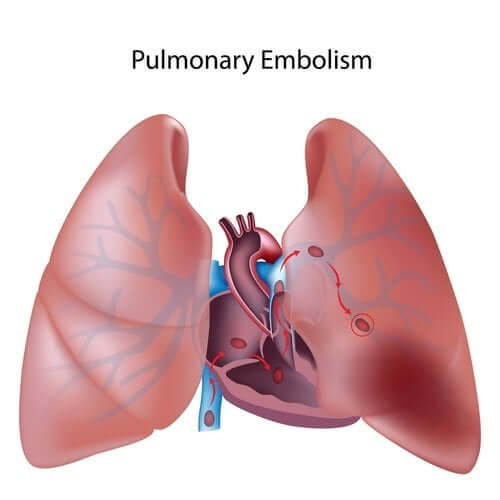 Pulmonary thromboembolism or pulmonary embolism is a potentially fatal disease. It occurs when parts of a thrombus break loose from somewhere in the venous area, migrate, and become lodged in the pulmonary arteries. In most cases, the emboli come from deep vein thrombosis of the extremities.

The result is an oxygen defect in the lungs and is one of the main medical emergencies. Furthermore, its diagnosis isn’t easy, as there are few signs that can guide the doctor.

Experts estimate that the incidence of pulmonary thromboembolism is 1 case per 1000 inhabitants per year. However, the true figure is probably higher. According to the data from Spain’s Ministry of Health, during 2010, 22,250 cases were diagnosed with a mortality rate of 8-9%.

In most cases, approximately 95% of them, the thrombus or clot forms in the veins of the lower limbs. Then, it migrates into the pulmonary artery.

It can also be air-based or fat-based. In the first case, we’re dealing with a gaseous embolus and in the second case with a fatty embolus. This occlusion mainly affects the lungs and the heart:

There are several risk factors that favor the onset of pulmonary thromboembolism. The most important are:

You may also be interested in reading: Venous Thrombosis Due to Contraceptives

The clinical manifestations of pulmonary thromboembolism are unspecific. This is why early diagnosis is difficult. That being said, some symptoms that could appear are the following:

People with recurrent pulmonary thromboembolism often progressively develop certain symptoms over weeks, months, or years. These include a chronic feeling of suffocation, swelling of the ankles or legs, and weakness.

Normally, doctors achieve these objectives with the administration of intravenous anticoagulant drugs. They administer this treatment during the first 5-10 days, the drug of choice for the treatment of pulmonary thromboembolism being heparin.

Treatment differs in the case of more critical patients or those who for some reason cannot receive anticoagulant medication. These cases require other treatments such as fibrinolysis in order to accelerate the dissolution of the clot. A filter can also be placed in the vena cava to prevent new thrombi from migrating into the lung.

Finally, once the patient is at home, they’ll be given oral anticoagulant drugs. The most commonly used is known as Sintrom. Generally, its administration is indicated for a minimum period of 3 months.

In patients who present a greater risk of pulmonary thromboembolism, this quarterly period usually extends and lasts a lifetime.