Everything You Need to Know About Lactose Intolerance

In this article, learn everything you need to know about lactose intolerance, including its causes and symptoms. 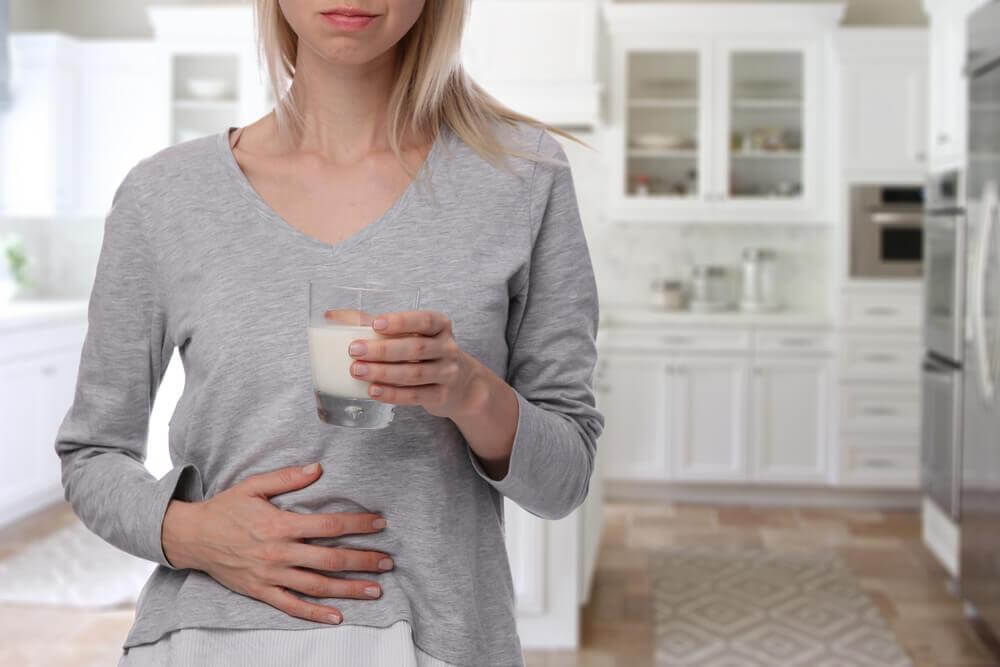 There are many degrees of intolerance, ranging from mild to major discomfort and intestinal damage.

Lactose is a disaccharide, a carbohydrate made up of two monosaccharides: glucose and galactose. Dairy foods contain this nutrient. Then, your body absorbs it at the molecular level in your intestinal cells, or enterocytes.

These cells have a cubic shape and microvilli in the part that comes into contact with the intestinal lumen.

The microvilli form an irregular surface known as the brush border. This area is where most of the nutrients are absorbed.

Some nutrients must be broken into simpler molecules to be absorbed and enter the bloodstream, as is the case of lactose. The lactase must divide itself into a molecule of glucose and another molecule of galactose so lactose can be absorbed.

Lactase is an enzyme located in the brush border of the enterocytes which is distributed unevenly through the digestive tract. It’s most abundant in the first sections of the small intestine, the duodenum and jejunum.

Lactase is at its peak during late pregnancy and lactation. After that, it decreases its activity.

In some ethnic groups, lactase expression decreases by the time they reach adulthood. However, in Caucasians, it never stops.

When your body doesn’t make this enzyme, it doesn’t absorb lactose. As a result, lactose reaches the colon, where the bacterial flora ferments it. There, it produces large amounts of hydrogen and irritates your gastrointestinal mucosa. This changes your digestion, causing gastroenteritis.

Take a look at this article: Which Dairy Products Contain the Least Lactose?

From a pathogenic standpoint, there is a lack of lactase due to two reasons. First, it is either because the enzyme isn’t synthesized, or it is due to a bowel disease.

First of all, primary lactase deficiency is the most common cause of lactose intolerance worldwide. It’s isolated and not caused by any other disease.

In this case, the body doesn’t synthesize the enzyme due to various causes:

In addition, it may be due to microvilli changes. These prevent normal carbohydrate absorption. This is the case of inflammatory diseases such as Crohn’s disease or ulcerative colitis.

Plus, italso occurs in intestinal infections that alter the digestive tract lining, especially in children.

As a result of lactose intolerance, after consuming dairy products the intestinal irritation will cause:

The severity of the symptoms may vary depending on the degree of intolerance. There are people who can’t tolerate milk but can tolerate other dairy products such as cheese or yogurt. In many cases, the symptoms are mild and most people can tolerate small amounts of milk.

When the deficit is congenital or appears in the early stages of development, children may suffer a significant developmental delay. In these cases, the consequences can be severe.

People may suspect they suffer from lactose intolerance due to gastrointestinal symptoms that come with milk consumption.

However, there are different tests that can be used to confirm primary lactase deficiency:

If these tests are abnormal, this may mean the person has lactose intolerance.

Most cases of lactose intolerance aren’t serious. Fortunately, you may reverse your symptoms by decreasing the amount of lactose in your diet.

Lactose Intolerant? How to Know If You Are
If you want to find out whether or not you may be lactose intolerant, we recommend you read this article. You will learn about signs, symptoms and tests.  Read more »
Link copied!
Interesting Articles
Illnesses
Gilbert's Syndrome: Symptoms and Treatment