Evening Syndrome: What Is It?

Evening syndrome can improve if the patient is exposed to natural sunlight during the early hours of the morning. 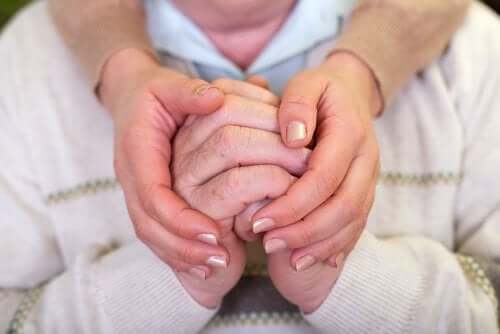 A person with evening syndrome feels agitated and disorientated in the late afternoon. It goes on during the night and can produce anxiety and irritation in those who suffer it.

Evening syndrome is a disorder that affects almost 20% of the people who suffer from Alzheimer’s. Alzheimer’s disease is the most common cause of dementia; it consists of a decline in a person’s cognitive abilities.

Alzheimer’s causes memory, thinking, behavior and many more cognitive functions to be altered. It’s a progressive disorder that ends up disabling people and affects almost 10% of the elderly over 65.

Due to its incidence and importance, in this article we’ll explain what evening syndrome is and how to treat it.

What is evening syndrome?

As we mentioned at the beginning of the article, evening syndrome is a period of disorientation that usually appears during the afternoon and which can last until night time. It affects people suffering from Alzheimer’s disease. In fact, it usually appears in those who are in the intermediate stage of this disease.

Professionals still haven’t determined why this syndrome appears. Some studies indicate that it’s caused by an alteration of the circadian rhythms. Circadian rhythms refers to that “internal clock” that allows us to control the cycles of rest and vigilance.

These rhythms are controlled by an area of the brain called the suprachiasmatic nucleus. Its function is based on a substance called melatonin. Specialists believe that evening syndrome is due to the fact that, in Alzheimer’s disease, this area is altered.

When this area is damaged, the amount of melatonin is modified and the entire biological clock is altered. This is the reason why the person feels confused and disoriented.

However, it’s also related to other factors. For example, specialists believe that fatigue, hunger, and thirst also influence this syndrome. Similarly, dimmer light at these times, pain, and discomfort are also associated with evening syndrome.

You may be interested in: The Impact of the Menstrual Cycle on Sleep

We must understand that evening syndrome isn’t actually a disease. It’s a set of symptoms that occur during the afternoon. In addition, it’s important to understand that it can also occur in other dementias, not only in Alzheimer’s.

Evening syndrome mainly causes disorientation and anxiety. Nevertheless, it can also produce aggressiveness or cause the person who suffers from it to wander around their home.

Those who suffer it sometimes try to rip their clothes or to throw objects. In fact, they may try to hurt themselves and scream. Some are very sleepy during the day and more active at night.

You may like: Anatomy of Dementia: How is The Life of a Demented Patient?

Tips for coping with evening syndrome

There are no specifics measures to prevent evening syndrome, but there are a number of actions that can help reduce or avoid the symptoms of Alzheimer’s. You should always go to a doctor for professional advice, but we can suggest the following tips:

Of course, we must give the person who suffers from evening syndrome with much love and build their trust. We must also try to help them feel as relaxed as possible. In addition, we must try to ensure that the person always has familiar objects close by. Whenever possible, avoid moving houses, as this can cause them a great deal of stress.

If someone close to you suffers from Alzheimer’s and you think they may be experiencing evening syndrome, you should visit your doctor for advice.

Although it’s hard, try to remain calm and transmit as much peace as possible. Try to establish daily routines for meals and activities, and above all, control sleeping hours.

Alzheimer’s Disease and Sleep Pattern Changes
Alzheimer's disease is a common condition that causes dementia. Although dementia is the most known symptom, it can also cause changes in the sleep patterns of patients. Read more »
Link copied!
Interesting Articles
Treatments
What's a Clinical Trial and What Does It Involve?