Epileptic Seizures: What Should You Do?

Epileptic seizures, especially if they're severe, require external help to prevent the affected person from hitting themselves and to help them breathe correctly. 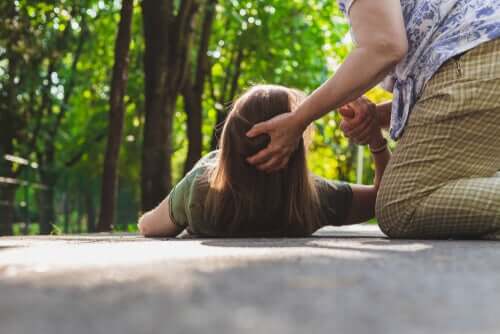 Epileptic seizures are paroxysmal changes that occur in a person suddenly and unexpectedly. Usually they end quickly. They’re due to abnormal neuronal activity that manifests suddenly, briefly, and temporarily.

The most characteristic feature of these seizures is that they start suddenly and last for a few seconds or minutes, sometimes. While the episode is developing, the person may lose consciousness and make rhythmic, sudden, and involuntary movements. It’s also possible for the person to be aware of everything that’s happening to them throughout the seizure.

According to the World Health Organization, there are around 50 million people with epilepsy in the world and 70% of them could live without seizures if the disease were properly diagnosed and treated.

Generalized crises, in turn, are subdivided into several types:

Simple partial seizures are very common. They occur with a loss of consciousness and, depending on where in the brain it started, symptoms vary. They may be:

Complex partial seizures also cause loss of consciousness. As they develop, the person may not respond to stimuli or may do so inconsistently.

Finally, there’s a type of seizure known as partial with secondary generalization. These are epileptic seizures that begin focused on one sector of the brain, but tend to spread throughout the brain and become generalized.

How to deal with an epileptic seizure

When a person has an epileptic seizure, you can help them. The first thing to do is to stay calm. Then, you should remove all objects that could hurt the person from their reach: furniture with sharp edges, vases, scissors, etc.

If the person has collapsed, you should put something soft under their head so that it doesn’t hit the ground. Once you take these steps, we recommend you loosen the garments around the neck, such as ties, shirt collars, etc. Then you should turn their body on its side so that they can breathe better.

It’s important to note the duration of the epileptic seizure, which usually ranges from two to three minutes. While the seizure lasts, you have to stay by the affected person and check that they come to their senses when it ends. It’s important to make sure they recover gradually, without exerting pressure, and then let them rest.

Don’t try to immobilize the person, or put any object or fingers in their mouth. You also don’t need to do mouth-to-mouth breathing. In general, seizures last for a few minutes and don’t require hospitalization. If it lasts more than five minutes, you should seek urgent medical attention