Endometrial cancer is more common after menopause, although it can sometimes appear in women younger than 40 years old. If you have a family history of gynecological cancers, it would be a good idea to establish periodic checkups. 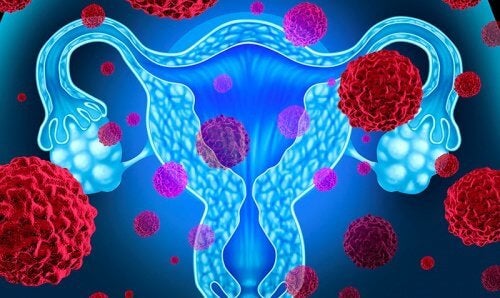 Recent studies suggest endometrial cancer generally affects 1 out of every 100 women.  It is most common in post-menopausal women. This is a fairly common type of gynecological cancer, but in spite of that, it is still not the most lethal.

As is common with most of these diseases, early detection undoubtedly increases the chances of survival. Currently, scientists still don’t know exactly what causes this disease. However, they found that constant estrogen changes tend to increase the growth of abnormal malignant cells in the lining of the uterus.

In this article, we will provide all the information you need to know.

In order to better understand how this disease starts and grows, you first need to look at the uterus and understand its structure.

What Does the Color of Menstrual Blood Reveal About Your Health?

1. The uterus and its changes throughout the menstrual cycle

It is between 50 and 60 years of age, once menopause starts, that the first carcinomas or sarcomas can develop. This simply means that there is a greater risk that certain cells will grow and adhere to the internal lining of the uterus.

As suggested at the beginning of this article, there is currently no way of precisely determining what causes these changes in the endometrial tissues to cause invasive malignant cells to form in the uterine lining.

In spite of this, experts say that there are risk factors that could cause these changes. Consequently, two of these include being obese and having high blood pressure.

We must point out that there is not a 100% direct correlation with obesity and cancer. This is simply an increased probability of preventing it if you take care of your weight.

3. Tamoxifen (medication to treat breast cancer) could increase the risk of endometrial cancer

How to Maintain Bone Density after Menopause

One thing you should always keep in mind is that endometrial cancer starts in the inner lining of the uterus.  Sometimes, especially during the early stages, it could register as negative on a common Pap smear test.

That’s why it’s always best to have a biopsy of the endometrial tissue, collecting a small sample, so a more in-depth analysis can be performed under a microscope.

You could also get a transvaginal ultrasound to be more sure.

If you have a family history of gynecological cancers, you should also see your primary care doctor for more frequent exams.  You should also follow certain preventive measures that could be helpful to you.

It turns out yet again that endometrial cancer has a fairly high rate of being cured.  The key for this disease is always early detection.

Make sure to be careful with your life habits, and set up periodic checkups with your gynecologist.  It’s worth it.

The WHO’s Findings on Meat and Cancer
What is the relationship between the consumption of meat and cancer? In this article, we're going to see what the World Health Organization says about it.  Read more »
Link copied!
Interesting Articles
Illnesses
The Connection Between Erectile Dysfunction and Diabetes