Encephalitis usually causes fever, headache, and fatigue. It can also cause coma and even death. It is a serious condition that, unfortunately, affects children under one year old more frequently than other groups. 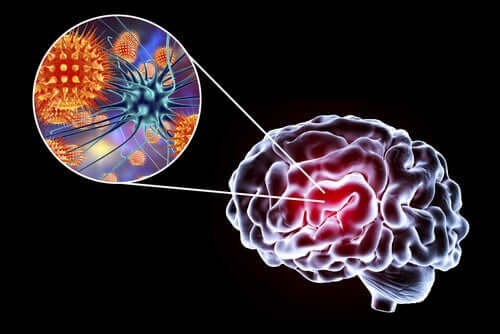 Encephalitis is a disease that consists of inflammation of the brain. It’s normally caused by a viral infection, although it can have many other causes. In fact, most of the time it’s a complication caused by infectious diseases.

Fortunately, encephalitis is not very common. In the last few years the number of cases has dropped significantly, thanks to extensive vaccination and official vaccine schedules. Even so, the portion of the population most affected by this disease is children.

Experts estimate that there are between 5 and 10 cases per 100,000 children. Unfortunately, the majority of them happen during the first year of life. It’s a complicated situation that puts the life of the person that suffers it at risk.

Both the causes and the symptoms can be confusing, and it’s essential to detect it early to avoid serious consequences. For this reason, we’ll explain what encephalitis is, its causes, symptoms, and treatment.

As we already mentioned, encephalitis is the inflammation of brain tissue. It’s a condition that can have several causes, although the vast majority of cases are caused by a virus. Nevertheless, it can also be caused by a bacterial infection.

In children, the viruses that most often cause it are measles, mumps, and rubella. Fortunately, there are vaccines for those diseases. Other causes are:

What are the symptoms of encephalitis?

Keeping in mind that the majority of cases are caused by a virus, the initial symptoms can be varied and vague. For example, a typical case will show tiredness, muscle pain, and headache. Additionally, it normally causes a fever.

When the condition progresses, the symptoms normally become more intense. You can experience seizures, loss of consciousness, and even problems speaking. Additionally, many people lose feeling in parts of their body.

In the case of babies, it can be very difficult to notice the symptoms. Kids normally show irritability, vomiting, or don’t eat correctly. In the most serious cases it can lead to a coma. If you don’t treat it, encephalitis causes death.

Find out more: What Are the Different Lobes of the Brain?

How do you treat encephalitis?

To diagnose this disease, doctors have to do different tests and studies. First, they have to do blood and urine analyses. This then allows them to direct their diagnosis and understand the possible causes.

Normally, they do an MRI or CAT scan to observe the brain. In some cases, they have to do a lumbar puncture (spinal tap). In this procedure they extract the cerebrospinal fluid which, when analyzed in a lab, can confirm the cause.

To treat encephalitis, the first thing to do is to keep the person stable and resting. The treatment includes analgesic medicines like paracetamol and non-steroid anti-inflammatory drugs (NSAIDs)

What should you do if you have encephalitis symptoms?

While it’s difficult to diagnose in children, some signs can direct your suspicions. In adults, you’ll notice an intense headache and fever, in addition to some alteration of cognitive functions.

There are some viruses that cause encephalitis for which there’s a specific treatment. However, that isn’t always the case. It’s very important, when faced with any symptom, that you see your doctor. Encephalitis can put your life at risk.

7 Brain Foods to Help You Strengthen Your Cerebral Activity
These brain foods not only help improve your memory, but also strengthen your overall cerebral activity. Learn more in this article! Read more »
Link copied!
Interesting Articles
Illnesses
What's an Intracerebral Hemorrhage and Why Might it Occur?