Making your own yogurt at home is the healthiest way to do it without worrying about harmful additives that might affect your health. 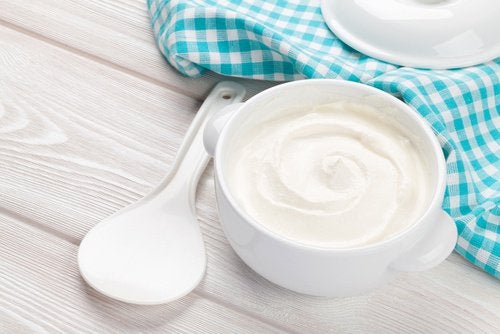 If there’s one thing that your intestinal flora loves, it’s yogurt, even though some studies, such as this one conducted by the VU University Medical Center in the Netherlands, state that it’s important to improve them.

Why should you settle for buying it at the store when you can make your own natural homemade yogurt?

They say if you want things done right, do them yourself. Do you want your own inexpensive, easy-to-make, homemade yogurt? If so, then make it yourself!

Natural yogurt is nothing more than fermented milk. In other words, it’s made up of millions of bacteria that get turned into lactic acid.

If you prepare it at home, you get to control what goes into it, especially regarding sugar and preservatives.

The idea is for it to be healthy and give you peace of mind that you’re not consuming industrial ingredients.

Commercial yogurts are filled with artificial colors and flavors to make them appealing. But how real are they?

There’s nothing like mixing that creaminess with fruit and watching the colors mix.

But don’t worry! If you’re not exactly a chef, it’s OK. We have a super simple recipe that you can follow.

It can be made in three easy steps: pour the ingredients in a container, mix them, and wait. It practically makes itself!

How to make natural homemade yogurt

The ingredients that you need are:

Read this article too: How to Make a Yogurt Sponge Cake

The benefits of natural homemade yogurt

Do you need any more reasons to make your own natural homemade yogurt? Dare yourself to follow the steps to make it at home and enjoy its health benefits. You’ll love it!

Homemade Greek Yogurt Recipe
Most people want to stay fit and keep track of what they eat. That's why the saying “you are what you eat” exists. If you eat healthy, you’re probably going to be a person with healthy habits in general. Today, you can learn how to make delicious Greek yogurt at home. Read more »
Link copied!
Interesting Articles
Healthy recipes
Two Ways to Make Healthy Rice

Rice is one of the most basic foods. Known and used throughout the world, it’s also one of the most versatile ingredients, capable of going well with almost everything. In…

Cauliflower garlic bread contains lots of this vegetable, as well as healthy unsaturated fats in the form of olive oil. Also, it…

Many of us associate legumes with hot dishes such as stews and soups. However, we can also enjoy them in…

Avocado salads are rather versatile and nutritious and you should include them in your regular diet. So, stick around, and…

Salads can be boring if they aren't seasoned. This is why we're going to offer you a vinaigrette, completely different…

Bread is a staple of many people's diets. However, many have begun to avoid it, since it’s often prepared with refined grains high in carbohydrates. Are there alternatives? Of course.…