Dumping Syndrome: What Is It?

A large number of people that have had gastric surgery develop dumping syndrome, or at the very least, some of its symptoms. Similarly, in the majority of cases, these symptoms appear spontaneously and gradually. However, very few cases become complicated. 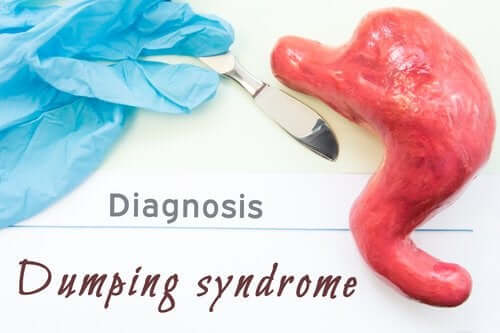 Dumping syndrome is one of the side effects that can develop after undergoing a digestive-related surgery. Also known as rapid gastric emptying, practically every patient that has undergone this kind of procedure presents some symptom of this syndrome after their operation.

There are references to dumping syndrome that date back to when doctors first began performing gastric surgery. In 1881, Theodor Billroth wrote an initial description of it. Hertz then used the phrase ‘rapid gastric emptying’ to describe a patient that had had a partial gastrectomy in 1913.

However, it wasn’t until 1922 that medical professionals observed rapid gastric emptying in patients involved in radiological studies. This was then dubbed dumping syndrome as it means to empty, pour, or expel, which is exactly what the body does in these cases.

What is dumping syndrome?

Dumping syndrome is a complication that arises after undergoing surgery on the digestive system. What happens is that the stomach’s contents pass through the small intestine too quickly, before the stomach has had the chance to completely digest the food.

This is what we call ‘rapid gastric emptying’. This unleashes a series of symptoms that include gastrointestinal problems as well as other kinds. The patient may feel nauseous, and experience colic, stomach cramps, or diarrhea, among other issues. It’s also possible that they experience hypoglycemia, weakness, dizziness, and/or sweating.

The possibility of developing dumping syndrome and its level of seriousness largely depend on the type of gastric surgery that the patient has had. Overall, this can last up to a year. In the majority of cases, the symptoms will spontaneously and gradually disappear.

The stomach is a kind of food deposit. It’s where the body produces acids and enzymes to start the decomposition process for the food and produce a substance we call ‘chyme’. In other words, the stomach converts food into a substance that’s easier to pass through other organs.

Under normal conditions, chyme should pass slowly from one organ to another. However, when someone undergoes gastric surgery, and this somehow complicates the pyloric sphincter, the food can move to the duodenum (the top part of the small intestine) too quickly. There are also cases where this happens even if the pyloric sphincter remains intact.

You may also be interested in: How to Use Cloves in Natural Remedies to Improve Digestion

There are two types of dumping syndrome. The two are characterized by the expulsion of a large volume of contents that comes from the stomach via the small intestine quite quickly. The differences between the two are the point at which it starts, the characteristics of the process itself, and its effects:

Keep reading: What are the Symptoms of Hypoglycemia?

In order to reduce the risk of dumping syndrome, we advise you to have five or six small rations of food a day and don’t drink any liquid whilst you’re eating. You should also wait at least half an hour to an hour to drink after eating.

It’s also a good idea to limit your consumption of carbohydrates or foods that are rich in sugar and only ever eat them with vegetables, meat, or fish. You should also eat slowly and take care when consuming dairy products. These steps are usually effective in preventing and treating the syndrome.

If you do develop the syndrome, you’ll need medical help. It’s possible that you’ll be given some medication to reduce the symptoms. If none of these steps work for you, it’s likely you’ll need surgery to correct the problem.

What Is Ischemic Heart Disease?
Coronary heart disease is known as ischemic heart disease. As its name indicates, the underlying process that causes the problem is ischemia. Read more »
Link copied!
Interesting Articles
Illnesses
What is Venous Thromboembolic Disease?