Side Effects of Lung Cancer Treatment Could Be Fewer

Cancer is a frightening reality for many people, but the goods news is that science is coming closer than ever to finding solutions. The new drug that we'll talk about in this article helps fight lung cancer with fewer side effects than chemotherapy. 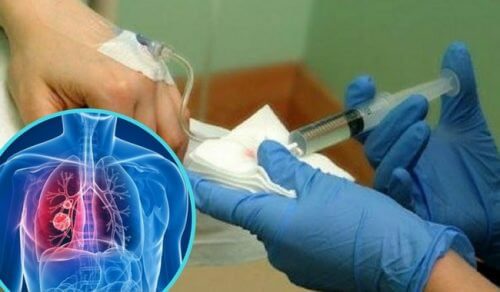 Those who have suffered from cancer say that the worst thing about it isn’t the treatment itself but its side effects.

Therefore, the scientific community is looking for solutions to reduce the side effects of chemotherapy, but they must have the necessary effectiveness.

It’s not an easy task, especially in the case of lung cancer. However, researchers are making very important progress. The development we’ll talk about below represents an example.

Nonetheless, first of all, we want to remind you of the consequences of receiving chemotherapy. Besides hair loss, which is a side effect you almost certainly know about, there are other common bad reactions:

This type of medication is so strong that it can harm organs that were healthy at first.

You must also take into account that there’s a cell battle going on in your body.

The evil cells must kill the good ones to survive, and they concentrate all their power to do this. With chemotheraphy, to kill the attackers, there’s no way around putting healthy tissues at risk.

In this regard, scientists are looking for alternatives that reduce these drawbacks. The objective is clear. Cancer patients and survivors should have a better the quality of life.

Immunotherapy: the Key to Fewer Side Effects on Lung Cancer Patients


Knowing what we just told you about cells, scientists thought that, to best prevent the side effects of chemotherapy, instead of trying to kill the bad cells, they had to find a way to strengthen the good ones. This is what they call immunotherapy.

Despite the developments in this area, science hadn’t succeeded in achieving a therapy harnessing the power of the immune system to fight lung cancer. Therefore, researchers decided to study how lung tumors behave to regrow after cancer treatment.

In the end, they found that lung tumors developed barriers that prevented drugs from coming into contact with their target. There were also cases in which the immune system generated a kind of tolerance for them.

See also: How to Detoxify Your Lungs

Then the next step was clear. They needed to create a drug dodging these obstacles. This would also have to cause fewer side effects on lung cancer patients.

A team of oncologists at Hospital Universitario 12 de Octubre, in Madrid, Spain, was able to devise how to do this.

The new cancer treatment targets not the immune system in general but a more specific protein called PD1.

Dr. Gil Bazo, a specialist in medical oncology, explains. He says that, when this protein encounters another protein, PD-L1, and they merge, the tumor doesn’t identify it as an enemy and leaves it alone.

This is the response Pembrolizumab, the new drug which is raising so many hopes, boosts.

However, it’s not helpful in all cases. Its effectiveness depends on the presence of PD-L1. In order for the protein fusion to take place, its presence has to be more than 51% when combining with the other protein.


In other articles, we’ve talked about therapies that prolong life expectancy, even though they can’t completely destroy a tumor. The lives of cancer patients undergoing them will obviously not be asymptomatic. However, they’ll live.

Also, at this point, it’s inevitable to think of conditions such as syphilis, tuberculosis and asthma. All of them were once lethal incurable diseases. However, their status today is very different.

Nowadays, their sufferers can live a full life. What’s more, science already found a cure for a wealth of them.

Lung cancer is very aggressive. Furthermore, its appearance is usually linked to very specific lifestyle habits that many people have a hard time quitting.

This difficulty makes this disease one of the most difficult types of cancer to treat and, therefore, one of the deadliest.

The approval of Pembrolizumab by the European Commission puts us at the starting line of an exciting journey. A race in which we, at last, have a chance of winning.

Living without giving up your dignity is always a victory.

We recommend reading: Studies Found Links Between Depression and Cancer

Aware of this, oncologists continue to focus their efforts on taking the next step. They know better than anyone that, in matters of medicine and science, the last word is never said.

In fact, medicine has reached this point because scientists haven’t given up and because they haven’t accepted what is established as fixed.

Of course, they embody the best revolutionary spirit. A type of spirit that rebels when facing the “impossible” to improve the lives of others.

Five Healthy and Low-Calorie Foods You Should Include in Your Diet
You should definitely include these five healthy and low-calorie foods in your diet if your goal is to lose weight. Read more here! Read more »
Link copied!
Interesting Articles
Medication
Magnesium Deficiency: Low Magnesium Levels in the Blood