Drinks That Aggravate Your Stomach the Most

The stomach is in charge of digesting food and drinks. What happens when we drink too much? In this article we talk about drinks that aggravate your stomach. 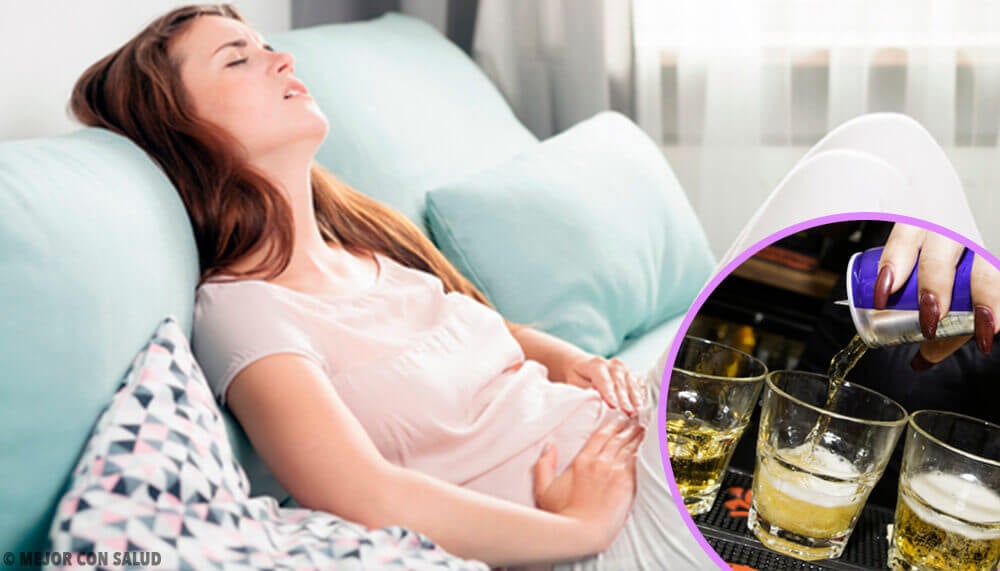 The stomach is an organ essential in the digestion of food and drinks.  Here they are absorbed and in the intestine they are metabolized.  This is going to depend on the type of food you eat and the way you consume it. People may over eat or drink too much of the drinks that annoy the stomach. This may be from bad habits or from lack of knowledge.

Alcohol is considered the most harsh drink for the stomach and other vital organs. Because of its high level of toxicity, it should only be consumed in small quantities and occasionally.  It not only creates consequences at the gastric level. It also affects the liver, the intestine, the heart, and other other organs. Alcohol produces harmful effects shortly after being consumed.

Remember that, because f the composition of alcohol, it is not considered nutritious. In addition, it is high in calories. These drinks have diuretic effects and if large quantities are consumed, they can cause dehydration.  These are the reasons, among others, that they produce hangovers.

Any alcoholic has the potential to be damaging to the body. Even more so, if the drinks contain a high percentage of alcohol and are then mixed with other commercialized drinks. The huge quantity of sugar contained in these drinks increase the caloric levels for the body. In the long run these are harmful to the health.

Also see: Do I have to stop drinking alcohol to lose weight?

The most common drinks that are harmful to the stomach

•  Aguardiente: one of the least recommended drinks. This is due to the distillation process of some type of aguardientes, especially those with a fruit base and high concentration of sugar. Also, those that have a high percentage of alcohol, such as 50% are harmful.

•  Amaretto sour: the combination of flavors could contain as many as 300 calories. This comes form the diverse commercial ingredients that are added when the drink is concocted. It can be as much as 57 grams of sugar for each drink.

• Anise or digestive liquor: another of the most harmful drinks for the stomach.  It gets its name from the plant of its origin and has a high percentage of alcohol.  Also, remember that it is the basis for other liquors.

•  In some countries it is commonly used as an aid to digesting food. This explains its consumption worldwide. It is high in calories, at between 295 and 300 calories.

•  Cocktails are known for their high calories. They can be made with rum, tequila, gin, vodka, etc.  They are also mixed with fizzy cola drinks. This combination increases, even more their high concentration of alcohol and calories.

•  Rum: this alcohol is mainly obtained from sugar cane and has a high concentration of sugar. The calorie content is about 244. It is a liquor that possesses a high alcohol content, and is generally used as a base for preparation of mixed drinks like mojitos.

•  Vodka:  at the top of the list of favorite drinks to mix with energy drinks.  It has the highest calorie content, approximately, 300 calories with an alcohol content of 42 percent.  Vodka is one of the most potent liquors.

2. Drinks that are stimulants

We should be moderate about our intake of drinks such as coffee, tea, or carbonated drinks since they have harmful effects on our stomach.  One of the consequences of having a lot of these drinks habitually is abdominal distention and damage to the gastric lining.  Because of all of this, gastric ulcers and insomnia may result  from over indulgence in these types of drinks.

Mixing  energy drinks with alcohol is especially damaging to our body. Its consumption brings with it a series of gastric and metabolic  problems, as well as a change in sleep patterns. Also, it can cause dehydration due to an elevated amount of alcohol and calories.

Among other consequences, are alcohol poisoning and in extreme cases, comas. These mixed drinks of alcohol and stimulant drinks cause grave consequences.

Four Shakes to Eliminate Toxins
Although our internal organs perform cleaning processes, they cannot always be kept free of toxins. Add these these shakes to your diet in order to eliminate toxins constantly. You'll be sure to get great results. Read more »
Link copied!
Interesting Articles
Did you know?
Vegan Meat Substitutes: What Are the Best Options?