All the Benefits of Drinking Green Tea

Drinking green tea has a lot of incredible benefits for your health. Learn about these many benefits and the best way to prepare green tea in this article. 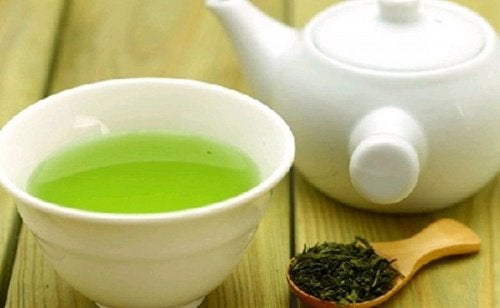 The benefits of drinking green tea for your health are many and varied. As you’ve probably heard, green tea has many antioxidants, as well as diuretic and thermogenic effects. It can protect you from a wide variety of health problems, such as heart disease.

In this article, we’ll take a look at the best way of getting the benefits of drinking green tea.

When you prepare a cup of green tea, the flavor will depend on how you make it. It all depends on the temperature of the water and the amount of time you allow it to steep.

According to tea aficionados, the perfect beverage is rich in flavor but without a bitter taste. When the water is too hot or the leaves steep for too long, the tea can become bitter. If the water is too cold, on the other hand, you won’t get the full flavor of the tea.

Remember that the time you need for steeping your tea depends on many things. This includes the size of the leaves, the type of tea, when it was harvested, and several other factors. Green tea is generally heated to between 140 ° F to 185 ° F and should steep for one to three minutes.

See also: The Perfect Tea for Your Diet

Preparing your green tea correctly means that you will preserve the benefits of the antioxidants it contains for your health.

Let’s take a look at some of the main factors to keep in mind:

Are there any risks when it comes to drinking green tea?

If you allow your tea to steep for too long, a bitter taste can occur and the caffeine content can also rise. In addition to that, there’s a chance that other substances may be extracted, such as pesticides and heavy metals.

How else can you prepare green tea?

If you want to maximize the antioxidant content of your next cup of green tea, try soaking it for about two hours in cold water to get a pleasant flavor. This way, you’ll be able to take advantage of the essential properties of this natural gift.

A number of scientific studies have explored some benefits of drinking green tea that you probably wouldn’t have ever imagined. These include its ability to reduce stress, which improves your heart health. Let’s take a look at three little known benefits of this great tea.

A 2009 study examined the oral health of 940 men. The scientists found that those who drank green tea on a regular basis had healthier gums than those who consumed it rarely or not at all.

For each cup of green tea per day, there was a significant difference in several indicators of periodontal disease. These included bleeding or redness of the gums, as well as erosion of the tooth enamel.

Read more: 9 Natural and Effective Tips for Taking Care of Your Teeth

Also in 2009, other studies concluded that drinking green tea every day can significantly reduce your risk of a stroke. Based on a review of nearly 195,000 people, the researcher found that those who consumed up to three cups of tea a day reduced their risk of a stroke by as much as 21%.

They found that those who drank more tea throughout their lifetimes were less likely to show signs of brain function loss or weakness. Those who consumed a cup of tea four to six times a week were 38% less likely to experience cognitive impairment.

Because there is still limited scientific research on the subject, it’s too early to recommend green tea as a treatment for any condition. However, there’s no doubt that drinking this great, healthy beverage is fantastic for your health.

Why not give it a try?

6 Important Benefits of Drinking Green Tea
Drinking green tea, over the last few decades, has become popular across the whole world due to its slimming properties. It is currently one of the most commonly consumed drinks and it is valued as a medicinal complement against certain illnesses due to its content of essential nutrients. Read more »
Link copied!
Interesting Articles
Infusions
How to Make Orange-Cinnamon Iced Tea