Do you Know How to Prevent Colds?

Low temperatures lead to the appearance of colds as the immune system is weakened. What symptoms do they cause? How are colds different from the flu? We have all the answers right here! 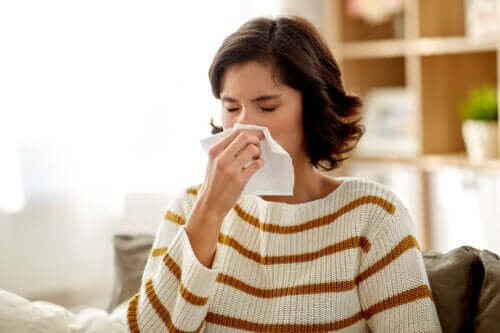 Who doesn’t want to know how to prevent colds?

We have to do our best to prevent colds and the flu, as well as other types of respiratory tract infections since they affect our health. In general, they all result in a high mortality rate and a significant expenditure of healthcare resources.

How do colds and the flu spread?

It spreads through the air, using virus-laden droplets. These droplets come from nasal secretions, bronchial secretions, or saliva, which makes their spread very rapid. The most important factor contributing to the spread of viruses is the cold winter temperatures.

Cold winter temperatures slow down our immune system. Also, the cold makes the nasal mucosa drier and less irrigated. Other factors that facilitate infection are:

The flu and colds: Is it important to know the difference?

Both the flu and colds are acute viral health issues that normally last approximately seven days. However, in both cases the symptoms are similar, they’re health issues with a high incidence and their treatment consists of relieving the symptoms.

The most characteristic symptoms of a cold are that there’s no fever, but there’s inflammation of the upper respiratory tract, eyes, and ears. Also, all these symptoms are accompanied by feeling unwell and loss of appetite.

The cold process manifests itself with sneezing, nasal congestion, and an itchy throat. However, as the days go by, nasal secretions become thicker, sometimes presenting a purulent appearance or consistency.

On the other hand, the characteristic symptoms of the flu include chills, sweating, and fever that comes on abruptly. Also, you may experience general discomfort, muscle aches, headache, sore throat, and dry cough.

Symptoms of fever and muscle pain usually last for several days, and recovery is generally longer, you could feel under the weather and have a cough for up to 2 weeks.

How to prevent colds and the flu

Preventing colds and the flu includes measures that should be taken to avoid and reduce the spread of viruses from person to person. These include the following:

Alternatives to prevent colds and the flu

Currently, there are alternatives to prevent colds and the flu, but not all cases have proven scientific evidence. The alternatives are based on substances present in vegetables and fungi, these substances contribute to strengthening the immune system.

In the case of fungi, such as ascomycetes and basidiomycetes, they provide benefits due to their germanium content.

Echinacea root and rhizome contain compounds that confer immunostimulant activity. There’s also evidence of the efficacy of the ethanolic extract of the root of pelargonium sidoides against viral infections of the respiratory tract.

You may also be interested in:  Why it’s Important to Eat Fruit and Vegetables According to WHO

Preventing colds and the flu is important. This is not only because of their impact on the health system but also because it’s one of the most frequent causes of school and work sick leave.

Oregano Essential Oil for Cold Relief
The use of oregano essential oil is related to respiratory health, so it's used in folk medicine to treat colds and flu. Find out more here! Read more »
Link copied!
Interesting Articles
Health
Types of Syncope or Fainting